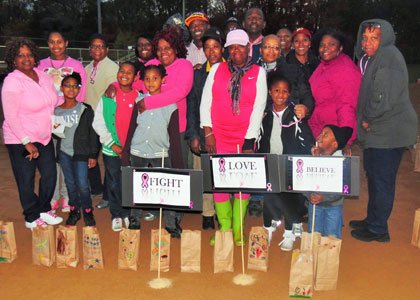 Deborah Wilkerson-Wilson and Eddie Cully hosted the 4rth Annual Passionately Pink Annapolis Breast Cancer and Cancer Awareness Candle Walk at the Pip Moyer Recreation Center Baseball Field in Annapolis. They are surrounded by some of the 30 walkers of all ages who showed up to show support for cancer survivors and people who are currently undergoing treatment for the disease and show interest in finding a cure for all kinds of cancer. (Courtesy Photo)

ANNAPOLIS — Deborah Wilkerson-Wilson works as a taxi driver and entrepreneur, but once a year the Annapolis resident inspires community togetherness through in-person advocacy work. Wilkerson-Wilson became a local voice for cancer survivors and individuals who lost their battles against the disease after her sister, Terri Wilkerson passed away from cervical cancer at the young age of 43. Before Wilkerson’s death, Wilkerson-Wilson promised to remind girls and women in the black community to get cervical and breast screenings.

“My sister [Terri] probably could have survived if she would have gotten help for it earlier. Her cervical cancer was treatable,” Wilkerson-Wilson said, reflecting on her sister’s death in 2006. “My sister and my mother [Joyce Johnson] were both going through chemotherapy at the same time.”

A brother and sister prepare to place bags around the Pip Moyer Recreation Center Baseball Field in Annapolis. Approximately 30 people attended the event.

After rain showers stopped on Saturday, November 7, 2015, Wilkerson-Wilson zipped around the perimeter of Hilltop Lane at the Pip Moyer Recreation Center Baseball Field in pink attire and green boots to secure event signage for the 4th Annual Passionately Pink Annapolis Breast Cancer and Cancer Awareness Candle Walk. Wilkerson-Wilson also promotes cancer awareness because her grandmothers, Catherine Hudson and Marybell Wilkerson both died from cancer long before her sister was diagnosed.

However, Wilkerson’s mother is a cancer survivor who represents hope that sometimes cancer can be beaten with treatment.

“I would like for this to grow every year and for the medical field to find a cure for cancer,” Cully said.

His patterned pink tie inspired smiles as friends greeted him on their way to the baseball field. Along with youth volunteers and other adults, Cully arranged candle bags around the baseball field. His sisters-in-law—Terry Regina Cully and Phyllis Y. Brown died from cancer.

One hundred candle bags were decorated by fifth graders who attend Mills Parole Elementary School and Germantown Elementary School. Names of survivors and deceased individuals were written on labels of the remaining 100 candle bags. Event walkers completed the first lap around the baseball field to honor survivors of any type of cancer. The second was completed in remembrance of loved ones. The final lap promoted cancer awareness and symbolized hope for a cure.

“Breast cancer affects everyone, not just the people who are diagnosed with it,” Cpl. Amy Miguez, a spokeswoman for the Annapolis Police Department said.

In keeping with Wilkerson’s final wish, information about The Anne Arundel County Department of Health's Breast and Cervical Cancer Program was available during the walk. Free breast exams, mammograms and Pap tests are offered to income eligible Anne Arundel County women over 40. For program details, call 410-222-6180.