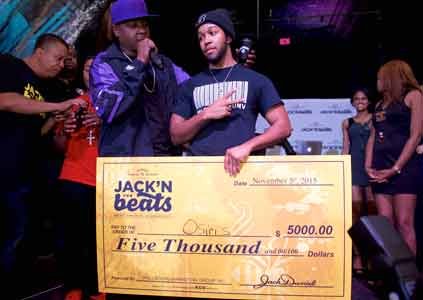 Osiris Green came close to learning one of life’s oldest lessons— you snooze you lose!

The 25-year-old Baltimore rapper who had planned to simply take a nap, decided against some quick shut-eye and instead, entered the Jack Daniels Tennessee Honey Jack ‘n For Beats rap music contest held in Washington, D.C.

When it was all said and done, Green walked away with the $5,000 grand prize, beating out more than 50 other aspiring hip-hop artists from Baltimore to Northern Virginia.

“I think everybody in the competition was very talented. No two people sounded alike,’ Green said. “I was a little nervous up until the day of the competition.”

Green, whose delivery and high energy impressed the crowd and the judges that included rap legend Jadakiss, was so nervous that he considered not attending the event.

He had entered the contest in 2014, but did not make the cut. When word of this year’s competition spread, Green says he still wasn’t convinced it was for him until he realized some of the changes that were made.

“Last year, you had to submit a video and I didn’t make it,” he said. “A friend told me that they’re doing it again this year and at first, I said I wasn’t interested but something told me to give it a shot. This year, they had a mobile truck that came to neighborhoods to make it more accessible for the artists. You got to interact and be more involved.

“To be honest, I still wasn’t going to do it and I was about to take a nap and then I happened to look online and noticed that it was being held about 10 minutes from my house so I got up and went because if you snooze you lose.”

Jack ‘N For Beats was originally piloted in Chicago, following the launch of Jack Daniel’s Tennessee Honey in 2011.

The competition was created to provide a platform for emerging hip-hop artists and the program was later expanded to cities such as Houston, Oakland, Los Angeles, Miami and Washington, D.C., according to officials at Jack Daniels.

Green, whose favorite artists include Eminem, Ludacris, Tech 9, Lil’ Wayne and OutKast, said he plans to celebrate his victory by releasing new music, including a new EP called “Asylum,” on his website, www.Speraticzent.com.

“After I won, I was talking to a couple of folks who do a lot of networking in the city and they said to ride momentum,” Green said. “I’m going to use my earnings to reinvest in my music as far as equipment because ironically my equipment started to break down before this competition and I was in a tight spot.”

Ideally, Green would love to join a hip-hop tour as an opening act, he said.

“Traveling and performing around the country and making connections and being able to support myself. That’s what I would like,” Green said.

Winning the Jack Daniels contest has at least provided a start, he said.

“Now, my phone has being going off nonstop,” Green said. “I will keep on pushing and work with as many people as I can.”