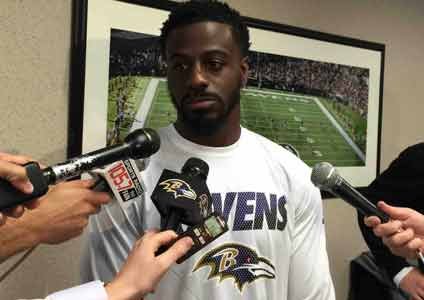 Baltimore Ravens cornerback Shareece Wright speaking to the media after signing with the team earlier this season. (Photo: Turron Davenport)

Shareece Wright and Jimmy Smith were teammates at Colton High School in California. They played in the same secondary, Wright at one corner and Smith at the other. The two players also starred on offense. Wright was a standout running back and Smith played wide receiver.

Smith says that Wright initially taught him how to play football.

“To be honest, when I first started playing football, he was the one [who] taught me. Him and another one of my friends, they were like football gods in our area,” Smith said. “I was just a basketball kid trying to play football. They taught me a lot. We’ve always had a great relationship; we’ve always stayed in contact. It’s just kind of crazy that he’s here [in Baltimore].”

The two defensive backs are now fellow starters at cornerback for the Baltimore Ravens. Wright was released by the San Francisco 49ers after not getting what he felt was a true opportunity to earn a starting spot. He says the 49ers seemed to be undergoing a youth movement, which wasn’t the best situation for him because he signed a one-year deal prior to the season.

The veteran corner asked the 49ers to release him and he signed with the Ravens soon after his wish was granted.

Wright says that his former teammate Smith encouraged him to come to Baltimore. The Ravens were trying to sign Wright and it was a phone call from his friend that made the difference.

“They told me they were trying to pick him up and [asked me] to give him a call,” Smith said. “He was leaning towards going to the Seahawks.”

Both the Seahawks and the Ravens scheme present a solid match for Wright because of his man coverage ability and Wright chose to be reunited with his high school friend.

“Me and Jimmy have been best friends since high school. We hang out all of the time in the off season and always talked about if we had the opportunity to play on the same team one day like we did in high school,” Wright said. “We said it would be a blessing. The opportunity came and it helps to have him to help me adjust and have someone familiar in the building.”

The first game that Wright played as a Raven didn’t go very well. He was beaten for a long touchdown by former Ravens wide receiver Torrey Smith. Since then, Wright has shown great improvement. He has locked down a spot in the Ravens nickel package.

Lardarius Webb and Jimmy Smith start on the outside, but Webb bumps inside when Wright comes into the game.

Smith isn’t having the kind of year that he feels he is capable of. When asked, if he thought he was being tested by opposing quarterbacks, he answered that he is coming off of a foot injury and if he were a quarterback, he’d throw in his direction also.

Smith is still drawing the opposing team’s top wide receiver as his assignment from week to week and for the most part, he has done a solid job in man coverage. The problems have come when the Ravens go to zone schemes. Smith is one of the best man/press corners in the NFL so he is always at his best when he is able to be disruptive at the line of scrimmage.

The Ravens defense is giving up 283.9 passing yards per game, which has put them in thirtieth place in the NFL. The team has given up a number of chuck plays to the teams they have faced. Wright and Smith will need to tighten up the coverage on the outside if the Ravens are to improve on passing defense.

Each week is an opportunity for Wright to gain experience and become familiar with the scheme. He has improved from week-to-week and the Ravens have employed more nickel packages that feature Wright on the outside.

Smith’s foot injury was a serious one and he is still working through the lingering effects that come with the injury. He is getting more confidence in his foot as the season goes on. Sooner or later, Smith has to make teams pay for testing him. The Ravens defense will be much better once he is able to start doing so.