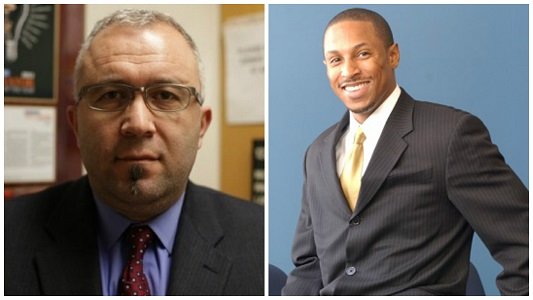 The Baltimore-born founder of The Juxtopia Group— a nonprofit established to reduce the critical STEM learning gap of underserved communities— has helped to find another solution to a problem that involves Alzheimer’s disease.

And, this solution has proven to be historic.

Aslan’s research has led to the first patent at MSU in the school’s 148-year history. The patented technology is metal-assisted and microwave-assisted evaporative crystallization.

“This will help scientists potentially develop new drug candidates against Alzheimer’s disease,” Aslan said. “To treat a disease, the scientist needs to understand the crystal structure of a protein that they suspect or know that is involved in the disease. Protein is really small and fluid, you can’t see it with your own eyes and that’s why we crystallize them so that we can see how the proteins are made up or what their structure is.”

Aslan likened it to a functioning building with rooms, doors and electrical plumbing.

“If one room collapses then what happens is you can’t use that room. That’s the disease state of a protein. That’s how Alzheimer’s is caused when the proteins are non-functional or unhealthy,” he said.

Doswell noted that MSU was having challenges to commercialize Aslan’s patent so that it could benefit millions of people in United States suffering from diseases like Alzheimer’s.

After a meeting, Doswell says he gathered his JUICE Network to solve the problem under the Health Informatics and Information Technology— or HITT— Disparities Campaign, which engages young engineering and entrepreneurship apprentices who are training in the art and science of biotechnology, engineering, health informatics, public health, media and urban entrepreneurship.

The campaign’s mission is to create innovative science and technology solutions that prevent and eliminate healthcare disparities in Maryland communities, Doswell said.

“The JUICE Network responded by accomplishing [several] milestones towards the mission objective in less than 12 months,” Doswell said.

The network assisted MSU in obtaining several grants and securing the patent.

“Now, iCrystal is one of many JUICE Network member companies that are collaborating where each JUICE member company is focused on a different piece of the disparities problem with a shared mission of objective to HIIT Disparities,” said Doswell, who two years ago was featured on the HistoryMakers, the nation’s largest African-American video oral history collection that preserved the life stories of thousands of historic black figures.

The patent is important, particularly in minority communities, because the Alzheimer’s Association reported that older African-Americans are twice as likely to suffer from aging-related dementia or Alzheimer’s as their white counterparts.