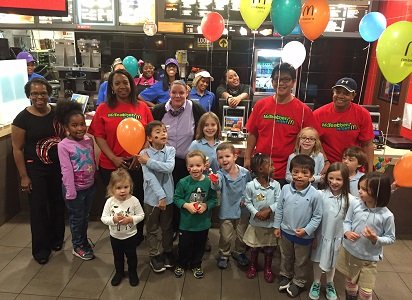 For over 33 years, the 135 Greater Baltimore area McDonald’s restaurants have worked closely with their community schools and donates over $75,000 annually for scholastic fundraising efforts. McTeacher’s Night celebrations support local schools, PTA organizations, Booster clubs, athletic teams and academic clubs through a donation of the percentage of sales from the event. McTeacher’s Night events are full of school spirit and energy, where Teachers and Administrators have been known to get into the fun by working behind the counter serving McDonald’s world famous Hamburgers and French Fries! In addition to the McTeacher’s Night events, McDonald's honors Maryland's twenty-four Teachers of the Year as the official sponsor of the Teacher of the Year Annual Cruise and the Teacher of the Year Gala.

“The McDonald’s Family Restaurant of Greater Baltimore takes our commitment to supporting education and the community incredibly seriously and we are thrilled continuously do so with this Baltimore city wide event,” said Scott Rardin, Baltimore McDonald’s Owner/Operator. “As locally owned and operated businesses, we are proud to support the students and schools in our neighborhoods to help make a positive difference in the lives of Baltimore’s youth and community.