The social media search for survivors of the Paris terror attacks 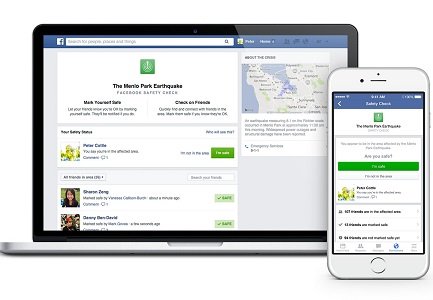 Facebook users who were in Paris during the Friday night terror attacks were able to notify friends and family that they were safe through the site's "Safety Check" tool. (Photo courtesy/Facebook)

NEW YORK (CNNMoney) — In the wake of the horrific attacks in Paris that claimed more than 100 lives, people around the world took to social media looking for their loved ones.

The outpouring began almost immediately as the French capital was overwhelmed by terror and confusion.

The attacks gripped the world late Friday night and into the early hours of Saturday.

Terrorists attacked six sites, including a stadium, a theater and at least two restaurants -- leaving Paris in mourning and many worried about people they couldn't immediately locate.

Facebook launched a tool it has used only a handful of times to help users track down friends.

On Twitter, numerous hashtags were created to help people find one another, and to provide shelter.

The hashtag #rechercheParis lit up with users trying to locate family members and friends after the attacks.

The hashtag, which translates to "search Paris," became a trending topic after it was first used by a woman in France at around 2 a.m. on Saturday, local time.

An hour and a half later, more than 100 tweets per minute used the hashtag, according to Twitter's data. And by Saturday evening, more than 64,000 tweets had used #rechercheParis.

Users from all over the world posted photos of people they were desperate to locate, along with descriptions and contact information. Many of the posts were retweeted thousands of times.

Even tweets that didn't contain #rechercheParis went viral because other people picked them up and added the hashtag themselves.

Successful and happy reunions also began to pop up on Saturday, although there were "too few," a Twitter spokesman told CNNMoney.

Many also used Twitter to offer shelter to people in Paris and to French citizens stranded outside of the country.

Two hours later, there were more than 6,900 tweets per minute with #PorteOuverte and variations of it.

Within 10 hours, there were about 1 million tweets.

In the United States, by Saturday afternoon, 26,000 tweets had used #strandedinUS, a hashtag for Americans offering their homes to stranded French travelers.

Facebook activated its "Safety Check" tool Friday night to allow users who were in Paris during the terror attacks to notify friends and family they were safe.

"In the last 24 hours, since we activated Safety Check: 4.1 million people marked themselves safe using the tool [and] 360 million people were notified that their friends were safe," a Facebook spokeswoman wrote in an email to CNNMoney.

Facebook also rolled out a new profile photo filter of the French flag as a way for people to show their support for France.

CEO Mark Zuckerberg added the filter to his picture after posting this message Friday evening: "My thoughts are with everyone in Paris tonight. Violence like this has no place in any city or country in the world."

Facebook didn't share data on how many people used the photo filter, but said that 78 million people have been "interacting" with posts about the attacks.

Safety Check was launched in 2014 and has been deployed five times -- all during natural disasters -- before Friday.

"We are shocked and saddened by the events unfolding in Paris. Communication is critical in these moments both for people there and for their friends and families anxious for news," Facebook said.

Safety Check grew out of engineering work Facebook did after the devastating 2011 earthquake and tsunami in Japan that affected more than 12.5 million people throughout the country. Its "Disaster Message Board" helped people communicate in a time of crisis.

Safety Check works by determining the location of a user by "looking at the city you have listed in your profile, your last location if you've opted in to the Nearby Friends product, and the city where you are using the internet," according to Facebook.