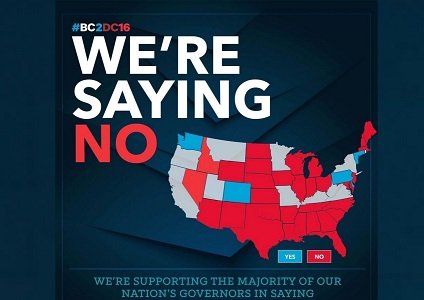 (CNN) — It doesn't take a brain surgeon to see there is something very wrong with this picture.

In a series of social media messages posted Tuesday, Ben Carson's campaign used a U.S. map that appears to have cut out Connecticut and Vermont entirely, while squashing and shifting Massachusetts and Rhode Island.

The map, which had been posted to the campaign's Facebook page, was deleted overnight. On Wednesday, the campaign put up a fixed map accurately picturing the states.

It was part of the candidate's effort to express solidarity for the 31 governors currently saying they do not want Syrian refugees resettled in their states.

Connecticut and Vermont have said they will follow federal guidelines and accept refugees, while Massachusetts will not. Rhode Island is still on the fence.