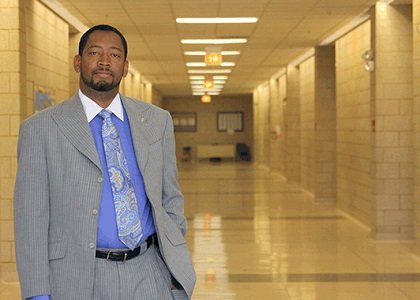 Greensboro native Byron Garrett is chairman of the National Family Engagement Council, which advocates for family involvement in education. (EDTECHPOLICY.ORG)

(NNPA) — Special to the NNPA News Wire from The Charlotte Post

“Education has always been a love of our family,” said Garrett, a Greensboro native and chairman of the National Family Engagement Alliance. “It’s always been the key thing that we believe to help you transition from one space in life to the next. So I found myself as a school principal and a state [education] advisor really focusing on education strategy and believing it is a key opportunity to do great work.”

Although education influenced Garrett, it was two nephews who pushed him to do more. They were living in South Carolina when Garrett learned they were having great difficulty.

“My eldest brother, their father, has been incarcerated for 18 years,” he said this week at EpicFest, a Charlotte reading festival for families. “So here I was a school principal helping someone else’s kids and then I find out my youngest nephew is two years behind. It even gave me a different sense of urgency to figure a strategy out. [I wanted to figure out] how we can help young people live the best life that they can and get a great education and that’s what’s critically important. I realized we all have a collective responsibility to think differently about how we support the education of young people.”

“There’s Greatness on the Inside,” Garrett’s first children’s book, was influenced by a student in Omaha, Nebraska when he was asked to speak to children in grades K-2.

“I was trying to figure out what I can say to a 6-year-old that would be impactful but is simple enough for them to have the concept and can be something that they can carry with them,” he said.

That is when he came up with the repetitive line that is featured in the book: “If the mind can conceive it and the heart can believe it then the hands can achieve it.”

He even came up with actions to go along with it.

“As I was leaving, one of the students said ‘this would make a great book’,” Garrett said.

Garrett had no interest in writing a children’s book and didn’t even know where to begin. So on his way back home on the plane, he jotted down key phrases from his presentation and later met up with illustrators determine to create a children’s book.

“After that it took on a whole different life of its own,” he said. “It’s something for people of all ages. Whether you’re an adult, student or working with children, it’s the message that’s universal and applies regardless of where you live or who you are.”

For EpicFest, Garrett was featured in a free workshop for educational leaders and parents. After the workshop, he made it his duty to visit John M. Morehead STEM Academy to talk to students about life skills and strategies that are effective in being successful. Anywhere he goes, Garrett does a school visit.