Lawrence Guy’s path to Ravens has been a long one 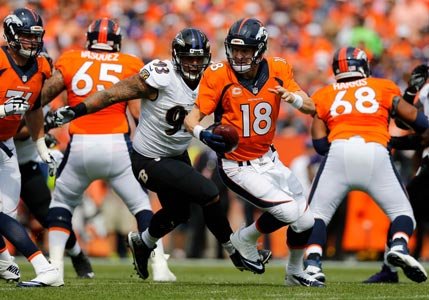 BALTIMORE — Lawrence Guy has settled in with the Baltimore Ravens in his second year with the team.

Guy is a part of the Ravens defensive line rotation and has even started a few games while Chris Canty was injured. The Ravens is the third team that Guy has played for since coming to the NFL out of Arizona State in 2011.

The Indianapolis Colts signed Guy to their active roster from the Packers practice squad. Guy started his first game for the Colts against the Kansas City Chiefs. Ironically, his first postseason start came against the Ravens in the 2013 wildcard game at M&T Bank Stadium, which was the start of the Ravens Super Bowl championship run after the 2012 season.

The Colts released Guy and he landed with the San Diego Chargers in 2013. He spent two years in San Diego before being claimed off waivers by the Ravens. His first action as a Ravens came against the Colts, one of his former teams.

Guy provided depth along the defensive line when the Ravens lost players such as Haloti Ngata and Timmy Jernigan at different times. His play earned him a contract from the Ravens. He signed a two-year, $2.3 million contract with the Ravens before the 2015 season. The deal includes a $500,000 signing bonus, $500,000 guaranteed, and an average annual salary of $1,150,000.

The Ravens named Guy to their season-opening roster. He survived the heavy competition that ended up in a few veteran Ravens players being released. Guy is tied with C.J. Mosley for second on the team with three sacks.

Going through the release/resign process can take a toll on a player who is trying to fulfill his dreams of staying in the NFL. The emotional roller coaster can test a player’s desire to keep playing. That is far from the case for Guy; his formula is simple.

“I just try to keep carrying out my assignments. I try to play my game and keep my technique sound,” Guy said. “I want to keep going out there and playing hard, playing football the Ravens way.”

There have been obstacles off the field as well. Guy suffers from both attention deficit hyperactive disorder and dyslexia. He took the disorder and turned it into a way to help others. Guy became a spokesperson for Arizona State University’s disability resource center.