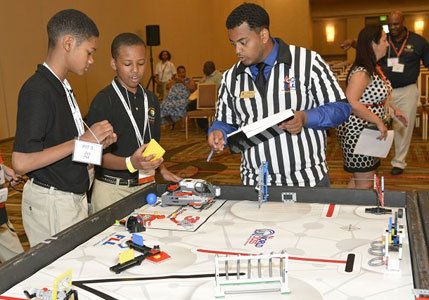 Students at a Summer Engineering Experience for Kids (SEEK) program event earlier this year. SEEK is the nation's largest summer engineering program geared towards African American pre-college students. SEEK was held at 17 different locations in 16 cities across the United States in July and August 2015. (Courtesy Photo/NSBE)

Just 19 percent of African-American fourth graders and 13 percent of the nation’s black eighth graders were proficient in math this year, according to the National Assessment of Educational Progress.

Further, in an analysis conducted by the National Society of Black Engineers (NSBE), just 5.5 percent of African-American eighth graders completed calculus in 2005 and five years later just 1.1 percent of the nation’s black college freshmen enrolled in an engineering program in 2010.

The National Society of Black Engineers wants to boost the number of engineering degrees granted to black students to 10,000 annually by 2025. (Above) Students at a Summer Engineering Experience for Kids (SEEK) program event earlier this year.

Today, the NSBE, one of the largest student-governed organizations in America, wants to boost the number of engineering degrees granted to black students to 10,000 annually by 2025.

The NSBE has launched a new outreach program that includes a pledge to encourage students to take STEM-related courses as early as the seventh grade. Participants would receive regular checkup emails from the NSBE, tips for parents to keep children engaged and scholarships.

According to the International Business Times, one reason for the low numbers surrounding black students and engineering is because relatively few African-American students have access to schools that offer high-level math classes.

An analysis of Department of Education Data by “Change the Equation,” found that only 57 percent of black students attend high schools that offer calculus, biology and physics— prerequisites for most engineering programs.

“What is the likelihood that a young child that is in a high-minority community interacts with an engineer?” There are none on television; there are likely none in their community.” said Karl Reid, the executive director of NSBE. “We tend to emulate the people who we’ve identified as having had success.”

For the NSBE’s “Be 1 of 10,000” campaign, the organization wants 150,000 black students to start thinking about becoming engineers and to committ to achieving academic excellence in subjects such as algebra, chemistry and physics.

To support these efforts, the students will be granted a number of resources supporting those goals.

NSBE says it must “increase the STEM proficiency of students who are even closer to the start of the ‘pipeline’ to engineering careers” to reach its goal.

Also, to help African-American youths in all age groups, NSBE hopes to expand its Summer Engineering Experience for Kids (SEEK) program for students between the third and eighth grade.

At the high school level, the society is asking public schools to offer more calculus.

Since the ultimate goal is to see the students through their college graduation, the campaign will focus on more than just the STEM foundation instilled in the students.

The NSBE wants college students to receive tutoring and advice from other engineering students who are further along in the process, as well as to be mentored by professionals in the community. Study sessions and test preparation will be strongly encouraged.

The NSBE will also work with universities to be able to offer peer-to-peer and mentoring programs. The colleges and universities are then tasked with recruiting, enrolling and graduating more African American engineering students.

“Ten thousand looks like a big number, until we divide it among our 227 collegiate chapters across the U.S.,” said Oyelowo, who is also a senior in biomedical engineering at North Carolina State University. “If each chapter graduates an additional three members by 2025, we will have met our goal.”

Beyond educating more African-Americans, another benefit of making the campaign a success would be the increased implementation of STEM-trained students in the global workforce.

“Graduating 10,000 black engineers per year will generate benefits that extend far beyond our organization,” Reid said. “By harnessing the STEM talent of greater numbers of African-Americans, we are expanding the corps of problem solvers and innovators in service to the nation.”