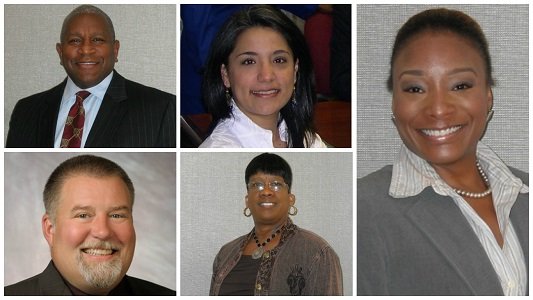 BALTIMORE — Seson Taylor-Campbell admittedly has a soft spot when it comes to serving the local community.

Whether it’s a nonprofit or a small startup, Taylor-Campbell, a development advisor for PNC Bank, wants to leave a special mark, one that clearly depicts the rise and change that the bank’s Community Development Banking team has helped to bring about for ex-offenders, those once homeless and area youth who may have little to no idea about a savings account.

Taylor-Campbell’s colleagues on the team, community consultants Lourdes Montes-Greenan and Franklin McNeil work hand-in-hand to identify community organizations with which the bank can create partnerships that will help uncover the unmet needs of small businesses in low-to-moderate income areas.

As market manager, Chris Rockey leads the team on lending, investing and services in the communities served by PNC.

“We’re very collaborative, very dynamic and have strong personalities,” said Rockey, a father of three who has been with PNC since 1999. “I feel that we have the best community development team and the most talented in the market. Everyone provides input and we do a consensus vote on everything, and everyone has to buy into whatever strategy we’re trying to employ and they have to own it.”

While the team works well together, it isn’t always easy, said office manager and administrative assistant Angela McFadden, who joined the team in 2008 after a career at the Federal Reserve and the urging of McNeil.

“I can tell when something is wrong. I try to keep cohesiveness by using tact and diplomacy and without pointing fingers,” said McFadden, who noted that her degrees in communications and human communications from Notre Dame have helped.

Her team has remained focused and has won the trust and support of many.

“When you’re doing community development work, it is a gray area with lots of needs and it allows you to have flexibility, to be socially aware of every action,” said Taylor-Campbell, a decades-long PNC employee who is a classically trained pianist and violinist.

“There’s so much need and sometimes it’s difficult to focus on what area a need will be giving during a specific period. You want to be good at anticipating risk and how it may impact the communities that we look to serve.”

“When you see eyes lighting up and you get that kind of ‘Aha’ moment, that’s when you know the job is working,” said Montes-Greenan, a wife and mother of a five year-old and a 13-month-old who became a U.S. citizen in 2011. “Many days I go home and I tell my husband that if I had every day like today when you see that smile that lets you know that you’ve benefited the community. Even with our school banking program where we teach children about savings— focusing on habits when it comes to savings— what’s

important is you see the behaviors changing and the good habits we’re trying to bring, it’s heaven on earth.”

Since its inception in 2008, PNC’s Community Development Banking has supported educational programs, provided direct services for students in classrooms, worked with startups and nonprofits and helped to enhance the quality of life through many initiatives, including hands-on financial literacy programs.

The team, which also works with community health organizations, schools and local governments, has been recognized as a leader in the banking industry and they count as a distinct business unit devoted to improving low and moderate income neighborhoods and the quality of life for residents.

“A lot of things to me say this job is worth it,” Taylor-Campbell said. “The most impact for me probably comes from the work that I do, specifically projects that have to do with affordable housing, economic development and urban revitalization. I have a soft spot and a compassion for serving underserved communities, helping ex-offenders and those who re-enter the market.”