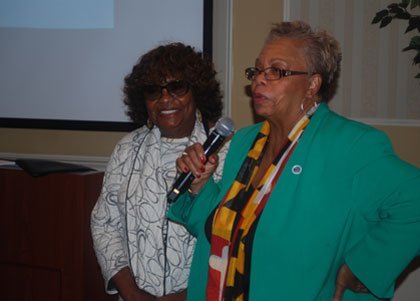 Fall is the time of year when Baltimoreans learn what’s happening on the state level in Maryland at the annual Legislative Black Caucus of Maryland Weekend. This year the Caucus Weekend was held November 5 - 7 and the programs focused on Maryland’s political landscape were interesting and informational.

This year’s weekend kicked-off with a Prayer Breakfast on November 5 in Baltimore at the Forum Caterers with the theme, “Remembering the Past, Celebrating the Present and Creating the Future.” The featured guest, Reverend Cecelia Williams Bryant (mother of Pastor Jamal Harrison Bryant of Empowerment Temple) gave a passionate speech on both the role of the black church in pursuing justice in the 21st century and the need to make children a priority in the black community. Notable attendees included mayoral candidate Sheila Dixon, Senator Catherine Pugh and Senator Nathanial McFadden.

The day ended with a dynamic workshop “Black Voices Through Written Expressions,” organized by Delegate Barbara A. Robinson, Democrat, District 40, Baltimore City, that discussed the importance of African Americans writing their own stories and understanding the business aspect of the writing world. The panel included author and mental health advocate Maxine Cunningham; Dewayne Wickham, dean of Journalism and Global Communication at Morgan State University; Dr. Maurice Dorsey, author of “Businessman First – a biography of Henry Parks of Parks Sausage; Cherrie Woods, a PR consultant with Eclectic PR who specializes in working with self-published authors; and James Wright, president of the Black Writers Guild of Maryland.

The 2015 Legislative Black Caucus weekend effectively balanced the topics of advocacy, education, affirmation and dedication with the overall message that if blacks in Maryland want change, they must show up. They need to be active, be conscious voters and consumers, know their elected officials, create businesses and become educated leaders.