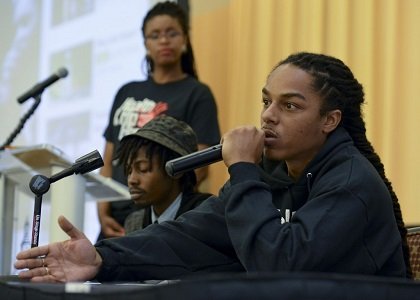 Messaiah Ramiskoon, an MC, youth advocate and three-time winner of “Showtime at the Apollo,” comments on homophobia in Hip Hop at the Health and Hip Hop Conference at Morgan State University in Baltimore, Md. (Freddie Allen/BAI)

(NNPA) — In an effort to increase awareness about HIV/AIDS among young Black men, a group disproportionately impacted by the epidemic, health-care providers and community stakeholders hosted the “Health and Hip Hop Conference” in October at Morgan State University in Baltimore.

The daylong program was sponsored by the Black AIDS Institute, the Maryland Department of Mental Health and Hygiene, and the Morgan State University School of Community Health and Policy’s Get SMART (Students/Society Mobilized and Retooled to Transform) Project.

Grim Jackson, an 18-year-old freshman communications major at Morgan State, said that he can relate to people who suffer from stigma associated with AIDS; when he was younger, students made fun of his mental disability.

Although reluctant to discuss the challenge it presented, Jackson said that the taunts and ridicule changed to cheers when he started performing. “I was in high school and I just started writing, and people were like, ‘Oh, my God, you’re good,'” said Jackson, who won second place in the spoken-word competition.

Get SMART Project Director Lorece Edwards, DrPH, the director of community practice and outreach in the department of behavioral health sciences at Morgan State’s School of Community Health and Policy, said that health-care providers and HIV/AIDS advocates and researchers wanted to educate young minority men about sexual-health choices and their possible outcomes. “This is a platform, a safe and brave space for men, that allows them to talk about health and hip-hop and their life experiences,” she said.

Justin Wooley, a consultant with the Black AIDS Institute, agreed. “We need HIV prevention messages with an ‘attitude,’ in the same way we had Niggaz Wit Attitudes, N.W.A,” said Wooley, referring to the hip-hop group. “The same way we talk about Magic Johnson, we have to talk about Eazy-E,” the N.W.A member who died of AIDS in 1995, nearly four years after Johnson announced his retirement from the NBA after testing positive for HIV.

Although the story of Eazy-E’s death was covered in magazines like Newsweek, Vibe and Jet, reports of heterosexual transmission were rare, and therefore, the possibility that Eazy-E had acquired HIV heterosexually was easily dismissed in favor of rumors of closeted homosexual activity, illicit-drug use, murder by HIV injection, tainted acupuncture needles and other urban legends.

During the panel titled “Hip-Hop, Health and Healing,” students and featured guests discussed masculinity, the perception that hip-hop perpetuates misogyny and homophobia and more.

Messiah Ramkissoon, an MC, youth advocate and three-time winner of Showtime at the Apollo for his spoken-word performances, said that homophobia is a sensitive subject in hip-hop and that people with perspectives on both sides need to be more tolerant. “People live their lives the way they choose, and they should not be disrespected or counted out from the culture because of it, but those that are homosexual also have to understand that certain people don’t agree with homosexuality,” Ramkissoon said. “The conversation is so sensitive that when you say you have a different perspective, well, now you’re homophobic.”