Is racism on the rise? More in U.S. say it's a 'big problem,' CNN/KFF poll finds 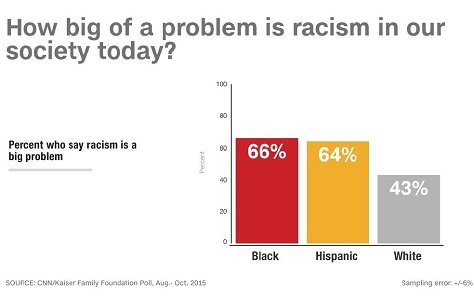 Poll asks how big of a problem racism is in our society today. The graph shows a breakdown of who says racism is a big problem between blacks, hispanics and whites. (CNN graphic)

Alex Sproul reads about it in his Facebook feed.

Sheryl Sims senses it when she walks down the street.

Their voices are just a few in a country of more than 322 million people. But they are far from alone.

In a new nationwide poll conducted by CNN and the Kaiser Family Foundation, roughly half of Americans -- 49% -- say racism is "a big problem" in society today.

The figure marks a significant shift from four years ago, when over a quarter described racism that way. The percentage is also higher now than it was two decades ago. In 1995, on the heels of the O.J. Simpson trial and just a few years after the Rodney King case surged into the spotlight, 41% of Americans described racism as "a big problem."

Is racism on the rise in the United States? Has our awareness changed? Or is it a problem that's been blown out of proportion?

There's not a one-size-fits-all explanation for the shift. The survey of 1,951 Americans across the country, which CNN will release and discuss in detail Tuesday at 10 p.m. ET, paints a complicated portrait, highlighting some similarities across racial lines and also exposing gaps that seem to be growing.

But this much is clear: Across the board, in every demographic group surveyed, there are increasing percentages of people who say racism is a big problem -- and majorities say that racial tensions are on the rise.

It caught Debra Aust by surprise.

The 48-year-old white woman from Sterling Heights, Michigan, says she didn't expect racism to get worse.

"It always seemed like it was getting better, like our generation was going to be better than previous generations," says Aust, who participated in the CNN/KFF poll. "But the TV started telling us a different story, with all of these shootings by cops."

For Aust, whose father and uncle both work in law enforcement, the news stories she's seen about unarmed African-American men being shot by police have hit home. The officers should be held accountable, she says.

"What's not helping is the police are getting off with a slap on the wrist. ... If it was me, and I was black, and this was happening in my community, I would be furious," she says.

The case of Walter Scott, who was shot in April by an officer in North Charleston, South Carolina, sticks out in her mind. The trial hasn't started yet. The officer's attorney says he plans to plead not guilty, and that race has nothing to do with the case. But Aust has already made up her mind.

"I mean, give me a break, he wouldn't have done that if the man was white, and that's the problem," she says.