The Art of a People: Finding a Way Out of No Way

Exhibition at the Banneker-Douglass Museum 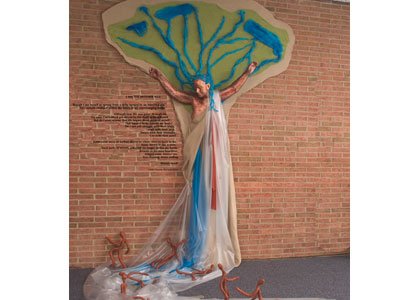 The Banneker-Douglass Museum opened its new temporary exhibition, "The Art of a People: Finding a Way Out of No Way," on Saturday, November 14, 2015. 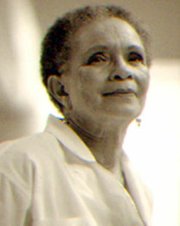 Together, they consider how African Americans have, as Burwell explains, “historically not only endured but triumphed in the process of overcoming.” The exhibition includes a range of Burwell’s works, including “Orison Piece 1994-95,” where she demonstrates her concept of painting-as-sculpture and works like “Water People” and “Mother Nile,” where she reaffirms the African foundation of African American spirituality, to new works like “2nd Turaco,” where she advances both concepts. Each contributing arts presents a signature mural making manifest the African American saying of “finding a way out of no way.”

Lilian Thomas Burwell, born in 1927, was educated at the High School of Music and Art in New York and Dunbar High School in Washington, D.C. She attended Pratt Institute and DC Teachers College before obtaining her MFA at The Catholic University of America. After teaching art at differing public schools in DC, she joined the Visual Arts faculty at Duke Ellington School of the Arts. She has participated in over twenty solo, duo, and group shows in the United States and abroad, including the Smithsonian Institution’s Anacostia Community Museum, the Chicago Museum of Science and Industry, and the Museo Civico D'Arte Contemporanea, U. of Palermo in Gibellina, Italy. In 1997, Virginia’s Hampton University Museum published her book, From Painting to Painting as Sculpture: the Journey of Lilian Thomas Burwell in conjunction with her thirty-year retrospective exhibition there. Of her work, Burwell states, “I am taken with the sense of art being something in which one participates and with which one interacts. The work of the artist is complete in as many ways as there are those who see or hear or feel it. I see the audience therefore, as a primary element in the fulfillment of a process as infinite as the life of the spirit.”

Here fifteen-year curatorial span includes: founding director of the Alma Thomas Memorial Gallery in Shaw for the D.C. Department of Education, curatorial director of the Sumner Museum and Archives, designer of arts curriculum for DCPS, art teacher at Pratt Institute NYC, head of visual arts department. at the Duke Ellington School of the Arts, and adjunct art teacher as recently as 2012 at Anne Arundel Community College. She has also worked as a graphic arts designer for the U.S. Department of Commerce and a freelance graphic designer for thirty years. In addition, the artist has been lecturing and writing for a span of sixty-three years, about which she comments, “and still working at what I love at 88! “

Dr. Joni Floyd, director of the Banneker-Douglass Museum declares: “We are truly honored to have such a talented and giving artist lead an exhibition here—so much so, in fact, that we have given her three galleries to express herself, to showcase the signature pieces of her selected artists, and to engage the public in workshops on the creative process. It is important that we honor an elder, who has spent more than sixty years teaching us that we are all artists, if we only open ourselves to exploring the depths of this life principle.”