Yasmine Arrington’s nonprofit has raised over $80K for college scholarships 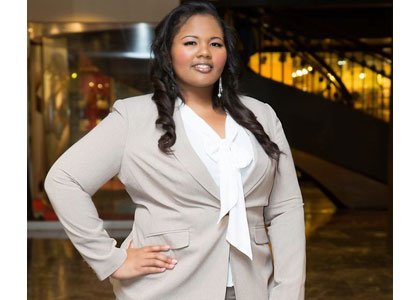 Over $80,000 in college scholarships have been awarded to 23 scholars with incarcerated parents by Yasmine Arrington's nonprofit organization ScholarCHIPS. (Courtesy Photo)

Yasmine Arrington primarily grew up in Washington, D.C. with a father in prison. She never let her experience prevent her from pursuing her dreams and making social change.

The 22-year-old social entrepreneur who is studying to complete her master’s degree at Howard Divinity School founded ScholarCHIPS, a nonprofit that awards college scholarships to children in Maryland, Washington, D.C., and Virginia who have incarcerated parents. Arrington started ScholarCHIPS in 2010, during her junior year at Benjamin Banneker Academic High School in Washington, D.C. To date, over $80,000 in college scholarships has been awarded to 23 students.

Yasmine Arrington (left) who was awarded the Peace First Prize on October 20, 2015 in New York will receive a two-year $25,000 fellowship to further her work through her nonprofit ScholarCHIPS. The other Peace First Prize winners are (L-r): Grace Callwood; Brennan Lewis; Jasmine Babers; and Xiuhtezcatl Martinez.

Arrington’s vision to support an often overlooked demographic has garnered recognition over the years. On November 12, 2015, Arrington was selected as a J.M.K. Innovation Prize winner and was awarded up to $175,000. The J.M. Kaplan Fund is a New York City-based family foundation supporting transformative cultural, social and environmental causes. The J.M.K. Innovative Prize seeks early-stage innovations in related fields.

Additionally, in late October, Arrington was one of five young people between the ages of eight and 22 who received the Peace First Prize from Peace First, the national nonprofit organization that invests in young people by helping them to become leaders and the next generation of peacemakers. She will receive a two-year $25,000 fellowship to further her peacemaking work, training, networking opportunities and coaching from a dedicated member of Peace First staff.

“I feel very grateful and encouraged that the teams at [the] Peace First Prize and [the] J.M. Kaplan Innovation Prize believe in my potential as a leader and mission with ScholarCHIPS. These awards will allow us to grow our organization [for] outreach and positive impact to youth with incarcerated parents,” Arrington said.

The idea to start ScholarCHIPS began in Arrington’s junior year of high school. Her mother Kimberly Wright died when she was a freshman in high school and her father, Tony Arrington was incarcerated. Yasmine and her siblings were being raised by their maternal grandmother Veronica Wright. While helping her granddaughter to search for scholarships, Veronica noted the absence of scholarships for youth with parents in prison. Around the same time, Yasmine was participating in a year-long extracurricular program called LearnServe International. Students were challenged to identify community issues that they wanted to be changed. Towards the end of the program in 2010, Yasmine presented her idea of ScholarCHIPS to a panel of local business owners and entrepreneurs in Washington, D.C. She received a $1,000 seed grant.

After Washington Post columnist, Petula Dvorak, wrote the first story about Yasmine and ScholarCHIPS, donations picked up. Yasmine even gained attention from the owner of the Washington Redskins, Dan Snyder.

“From that point, we just started doing a number of fundraising events like an auction and [other] things that helped us to raise our first funds. When I was preparing to graduate high school, I received a call from Dan Snyder. He called the school [Benjamin Banneker Academic High School] and said, ‘Yasmine, we just want to let you know congratulations, you are 2011 Redskins Scholar.’ And then on top of that, he said, ‘We’re going to provide ScholarCHIPS with a match grant. I think at that time we had raised about $5,000. So right there we ended up with $10,000,” Yasmine said.

Arrington ultimately located multiple scholarships that covered her four years of undergraduate tuition at Elon University in North Carolina. In her sophomore year, she was honored as a 2012 BET Black Girls Rock M.A.D. (Making a Difference) Girl.

Yasmine explained that producing scholars helps children of incarcerated parents to understand that their future is not defined by their parent’s status.

“They have the power to write their own story. It’s what you make it. There’s no limit to the positive possibilities,” she said.

For more information or to make a donation to ScholarCHIPS, visit www.scholarchipsfund.com.