Ravens plan to rally behind Matt Schaub against the Browns 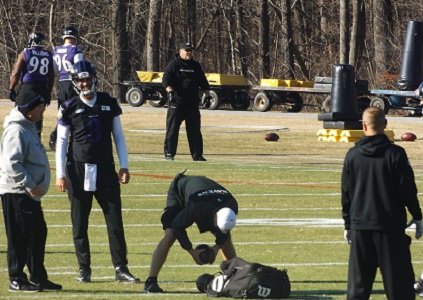 Experience was one of the major factors that influenced the Baltimore Ravens to sign free agent Matt Schaub to be their backup quarterback. Earlier this season, quarterbacks coach Marty Mornhinweg pointed out how Schaub has won plenty of games as a starter in the NFL and how he is a great addition to the quarterback room.

The Ravens will rally behind Schaub as their starting quarterback against the Cleveland Browns. Many players on the team spoke about how well Schaub has practiced during the season. Jimmy Smith said he feels that Schaub is the best option and is confident he’ll get the job done.

The belief that Schaub can get the job done stems from head coach John Harbaugh. He staunchly defended Schaub after he announced that Flacco would be gone for the season. He even challenged those with little faith to doubt the veteran quarterback.

“Matt Schaub can play quarterback, and he’s going to come in,” Harbaugh said. “He’s going to play very well. Everybody out there can talk about how he can’t – those who want to consider themselves amateur evaluators – they can say what they want. It’s OK, we’ll rally behind Matt.”

A lot of that confidence stems from how Schaub has been in meetings and how he has executed the scout team offense for the Ravens defense.

“Matt [Schaub] has been in every single meeting. He has experienced everything that we’ve gone through as a team this year. He has had every coaching point looked at. He has been a part of all that process. It’s not like he’s coming in from the outside new. He has been here. I think he has benefited from practice every single day. He has taken the reps mostly with the ‘look’ team, but he has also taken plenty of our reps,” Harbaugh said. “We do go against each other at times, so he has been in our offense. And he has looked good in practice. He’s a veteran. He has been there before. He knows how to handle himself. He knows how to operate. The players have confidence in him. I have absolutely every expectation that he’s going to play very, very well.”

The game plan may change slightly with Schaub as the quarterback. The Ravens will likely rely more heavily on the run game and work play action passes once they establish the run. The play action will help Schaub because it allows him to throw the ball outside of the numbers on the run.

Schaub has found success in the NFL in the past. Most of his successful years were spent in a scheme that featured a lot of play action passes and a tight end making plays in the middle of the field.