The Un-Islamic State of Terror 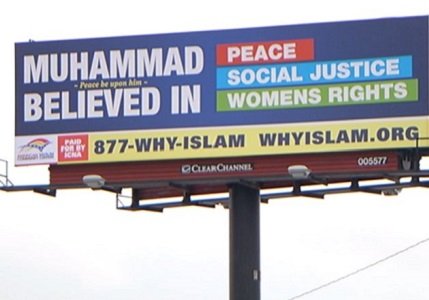 In Central Florida, Muslims are using billboards to sort out the facts from the fiction behind their beliefs. (Photo: CNN)

In the wake of the coordinated terrorist attacks in Paris and the double suicide bombing in Beirut on November 12, 2015, many Muslims took to Twitter to loudly and unequivocally condemn the terrorists attacks with the hashtags— #NotInMyName, #MuslimsAreNotTerrorist, but is this enough to counter Islamic extremism? When will “moderate Muslims” stand up and speak against the terror and mayhem committed in the name of Islam? Thanks to Al-Qaeda, ISIS, Al-Shabab, Boko Haram, etc. Islam is facing a major branding problem. Islamic extremism is damaging and endangering the place of Islam and Muslims in the world. As Daniel Pipes argues, if militant Islam is the problem; moderate Islam is the solution. “Moderate Muslims” all over the world, particularly those living in secure environments, must speak out more to condemn and further isolate the medieval extremist elements.

As a moderate/progressive Muslim, I want to note that ISIS does not speak for me nor do I share any iota of their twisted beliefs. ISIS poses a direct challenge to the principle and vision of Islam and a threat to humanity. To say ISIS is un-Islamic is an understatement. In essence, ISIS is an international band of thugs using religion and terror to rape, kill, and extort money. Arguably, ISIS and their sympathizers are willfully and pridefully ignorant. Of course, cognitive dissonance is difficult to overcome. The sad part is that ISIS followers truly believe they have the right interpretation of Islam. Thus, they have created some delusional reality where they ignore tolerance, acceptance, inclusion and coexistence— the core principles of the religion.

As Fareed Zakaria once alluded that both those inside and outside the Muslim world must recognize that the fight against violent Islamic extremism is not a clash between Muslims and the West or a clash between civilizations. “Moderate Muslim” leaders— by far the vast majority— must condemn jihadist ideology and issue Fatwas against extremism. Islamic extremism has to be defeated ideologically and its narrative reformed. As in World War II or the Cold War, the ideological opponents had to be defeated, followed by transformation of the societies in which the ideology took hold. There are more than 1.6 billion Muslims worldwide and the vast majority are peace loving and it is within these “moderate Muslims” that the problem lies. The term “moderate” has lost its standing in the Islamic world and “moderate Muslim” voices are often drowned out by the extremists. We must lead the way in promoting counter narratives to extremist ideologies.

Complete military success in Iraq, Syria and other ISIS controlled territories will not destroy the terrorist threat. Reciprocal violence will not stop terrorism over the long term; there are always more recruits to fill the ranks and only a few terrorists are needed to inflict destruction. Other counterterrorism methods such as targeted killings, infiltration, arrest, military repression or marginalization may not work; may be insufficient on their own to end a campaign; or may even worsen the problem overall. The West should focus on winning the hearts and minds of moderate Muslims to counter Islamic extremism.

Though the creation of an Islamic state is an important factor among ISIS’s grievances, there are other grievances that proved fertile recruiting ground for ISIS. The threat of Islamic extremism will disappear only if the region manages to reduce chronic poverty, unemployment, end rampant government corruption, promote democratic principles, and end political disenfranchisement.

To any extremist or ISIS sympathizer who reads this, call me an infidel, I will proudly take that name. I’m not committing blasphemy; I’m challenging your twisted ideology.

Foday Justice Darboe is a Ph.D. candidate in Conflict Analysis and Transformation.