Could Hurricane Joaquin be another Superstorm Sandy? 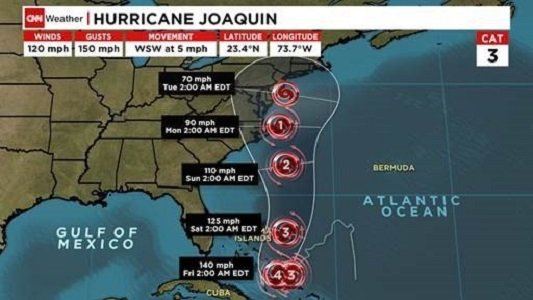 (CNN) — It's October. A powerful hurricane is brewing in the Bahamas. The whole system is threatening to head straight north to the United States.

You can't blame the people along the East Coast if they're having a Superstorm Sandy flashback when it comes to Hurricane Joaquin.

The powerful tropical system became a major hurricane overnight. And over the next day, the Category 3 storm is expected to only get stronger.

The good news: If current projections hold, Joaquin won't be another Sandy.

The not-so-good news: Hurricane projections are notoriously unpredictable. And regardless of whether Joaquin makes landfall, it probably will cause plenty of rain and more flooding along an already soaked East Coast.

Where it is now

For the next couple of days, Joaquin will be pounding the Bahamas, an archipelago nation with more than 350,000 people, before heading north.

Thursday morning, the storm already was whipping Bahamian territory with hurricane-force winds, with the eye about 10 miles (16 kilometers) from the country's Samana Cays.

Its maximum sustained winds were at 120 mph, midrange for a Category 3. But forecasters say it could strengthen to a Category 4 -- with 140 mph winds capable of causing catastrophic damage -- by Thursday night.

Rain isn't the only concern: Dangerous storm surges -- with water levels as high as 5 to 8 feet above normal tides -- are possible on the central Bahamian coasts.

Joaquin's forecast track shows it could be near North Carolina by Monday and possibly New Jersey a day later, hauntingly close to where Superstorm Sandy made landfall in 2012.

It was just three years ago this month that Sandy slammed the northeastern United States, devastating parts of New York, New Jersey and Connecticut.

But the projected path of the current storm system already has changed multiple times and could change again.

And should Joaquin make it back to the areas Sandy devastated before, it's not expected to pack the same punch.

How bad it's likely to be

When Sandy made landfall on October 29, 2012, it had hurricane-force winds. Joaquin is projected to be a tropical storm once it gets that far north.

No matter where Joaquin goes, the storm is expected to bring significant rainfall to the East Coast, where some states already were dealing with flooding from separate systems this week.

"One way or the other, North Carolina, South Carolina, Virginia and on up will get between 5 and 10 inches of rain -- even without a direct landfall," CNN meteorologist Chad Myers said. "If we get a landfall, we get 15 inches of rain and winds of 80 mph.