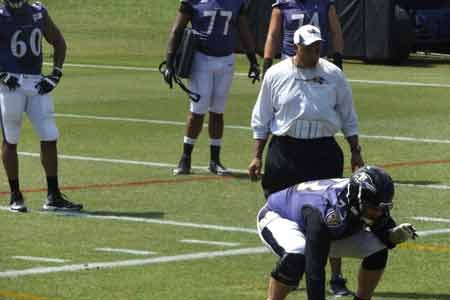 National Hispanic Heritage Month is a time when the contributions and achievements of Hispanic/Latino Americans are recognized in the United States.

The Baltimore Ravens are one of a handful of teams with an Hispanic coach on their staff. Offensive line coach Juan Castillo has been a model of consistency and hard work since he came to the team.

The Philadelphia Eagles hired Castillo as an offensive assistant in 1995. The following year, the Eagles used a draft pick on Jermane Mayberry, one of the linemen that Castillo coached in college. Castillo coached the tight ends for the Eagles in 1997 before switching to the offensive line in 1998. It was at that point that he really got to work with Mayberry and helped him to develop into a Pro Bowl player in 2002.

Castillo coached the Eagles offensive line for 13 seasons before becoming the team’s defensive coordinator in 2012. Things didn’t work out in 2012 for a variety of reasons and Castillo joined the Ravens coaching staff in January of 2013. He and Ravens head coach John Harbaugh coached together for the Eagles.

Fortunately for Castillo, Harbaugh and the Ravens were making their push towards a Super Bowl title.

The Ravens drafted a big, but raw prospect out of Iowa State University named Kelechi Osemele in the 2012 NFL Draft. Osemele was forced into action when starter Jah Reid was injured. Castillo helped Osemele adjust to the NFL, which was key to solidifying the Ravens offensive. Osemele did an outstanding job against one of the top defensive lineman, Justin Smith and the San Francisco 49ers, when the two teams faced off for the Super Bowl trophy. The offensive line play was a key factor in the Ravens winning that game.

Castillo came from a small college called Texas A&I. He played linebacker in college and got a taste of professional football while playing for the San Antonio Gunslingers of the USFL.

He has always taken an interest in small school prospects because he has the same background. The Ravens selected Robert Myers in the fifth round of the 2015 NFL Draft. Castillo really liked Myers because he reminds him of Osemele.

The work ethic that Castillo displays is inspirational. It’s not unusual for him to be the first to arrive at the facility. Getting an early start is something that he learned early in his life. His dad made a living by fishing for shrimp. He would wake Juan up at 3:30 a.m. to go to the fish house. Tragedy struck the Castillo family when his father fell from a boat and drowned, which left Castillo’s mother with the responsibility of making ends meet for the family. She worked two jobs and did her best. Watching her grind instilled the two biggest values that Castillo lives by today. Those values are his work ethic and the importance of always treating people with respect.