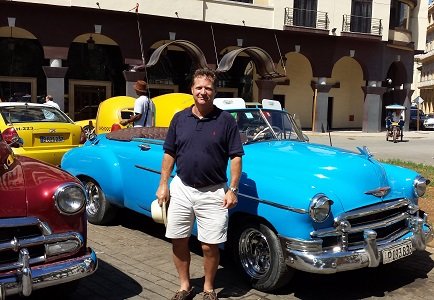 County Executive Steve Schuh on a walking tour of Havana. (Photos Courtesy of the Anne Arundel County Delegation to Cuba)

ANNAPOLIS, Md. — Anne Arundel County Executive Steve Schuh concluded his official visit to Cuba after a meeting Friday with Ambassador Jeffery DeLaurentis and officials at the U.S. Embassy in Havana.

“I thank the Ambassador and his staff for educating our county leadership on current US/Cuba relations,” said Schuh. “By beginning an important dialogue, I believe this trip will open up exciting possibilities for Anne Arundel County and its education, arts, recreational, and business communities.”

Schuh was joined at the Embassy briefing by economic development and trade officials including Robert Hannon, Chief Executive Officer of the Anne Arundel County Economic Development Corporation, Alan Friedman, a member of the Executive Committee of the Annapolis & Anne Arundel County Conference and Visitors Bureau, and Lou Zagarino, from the Board of Directors for the BWI Business Partnership.

BWI in 2011 received approval from U.S. Customs and Border Protection to offer service to Cuba. The airport is among just nineteen facilities in the United States that have approval to offer flights to Cuba.