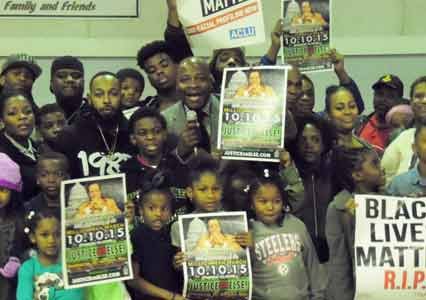 Talent show participants, parents and members of the Annapolis Local Organizing Committee (L.O.C.) proclaim that black lives matter at the end of the event. L.O.C. will sponsor free buses to take Annapolitans to the 20th anniversary of The Million Man March on October 10, 2015. Troy Stansbury (middle) is the chairperson of Annapolis L.O.C. (Photo: Andrea Blackstone)

ANNAPOLIS — On the evening of October 2, 2015, the Stanton Community Center located at 92 West Washington Street in Annapolis buzzed with activity. Some people showed up for a talent show featuring local youth and despite inclement weather, a steady flow of hungry customers trickled in to pick up dinner platters that were sold by Chef Ron & Friends and organizers of Annapolis Local Organizing Committee (Annapolis L.O.C.). With a portion of the proceeds, Annapolis L.O.C. will reserve buses to provide free transportation to and from the 20th anniversary of the Million Man March that will be held at the National Mall in the District of Columbia on Saturday, October 10, 2015. Troy Stansbury, chairperson of the recently established Annapolis L.O.C., explained that 25 members want to make a positive impact in Annapolis.

Youth received a private pep talk from Stansbury about black lives mattering before the first Peace In The Streets Youth Talent Show kicked off. The grassroots effort garnered support from Muslims, Christians and a variety of people from various walks of life who want to promote peace in the community, while reducing area violence.

After the talent show began with a Muslim and Christian prayer, talent show participants were eager to rap, sing, dance, perform gymnastics and recite spoken word. Allen Henderson served as the emcee for the talent show and explained that the event was an effort to pull the community together. He welcomed youth performers who provided most of the entertainment. Montre Seay rapped about his love of fatherhood. A mother who lost her child to violence recited poetry, which underscored Stansbury’s reoccurring message to strengthen unity and value each other more.

“One of the main purposes of the talent show is to bring about a sense of consciousness amongst ourselves in the community,” Stansbury said. “So in this talent show we want to excel a little bit, then perhaps we’ll stop doing violence amongst each other.”

Annapolis L.O.C. plans to do more in the local community. Stansbury reminded talent show attendees that members of the organization will need continued community support to effectively implement their efforts. Members like Veronica Grant helped to spread the word about the talent show on social media and pitched in to offer hands-on support on October 2. Adia Doores, a singer in the band, Project 360 agreed to serve as a talent judge along with See Allen. Doores said that it was her first time participating in the community outreach program, but she looked forward to it.

“I wanted to get in things like this in the past, but I just haven’t, so this is a great opportunity,” Doores said.

It was four-year-old Keith Herbert’s first time participating in a talent show. Keith danced and his 12-year-old sister, Synae Frazier sang ‘Opportunity’ from the Annie soundtrack. Their mother, Landis Harwell happily watched her children perform. Each talent show entrant received $15 and a certificate of participation. The activity was a confidence booster and it encouraged fellowship for a good cause.

“I’m really, really happy about it , because I know that there’s a lot of events that take place that don’t really have a turn out,” Harwell said. “I am grateful for some of my kids to show some of the talents that they have and to get a little more experience.”