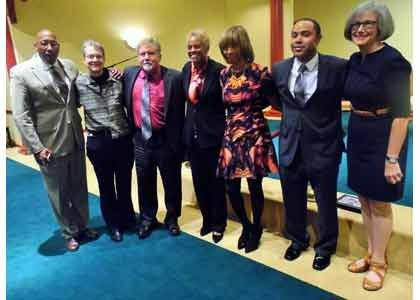 BALTIMORE — On Thursday, October 1, 2015, over 225 people attended the first forum in a three-part series called “The Future of Baltimore Conversations and Solutions: How We Got To Where We Are As A City” at New Shiloh Baptist Church in West Baltimore.

Local leaders and community members were afforded the opportunity to explore solutions to Baltimore’s civic and social issues after the unrest in April at the PNC sponsored event hosted by he Center for Urban Families (CFUF).

“PNC has had a long-standing commitment to the people, families and businesses in Baltimore,” said Chris Rockey, market manager for Community Development Banking at PNC Bank. “There was a lot of pain and a lot of concern after the civil unrest. We thought it would be a good idea to create a forum where people can gather and talk about these issues in a constructive and positive way and hopefully form solutions or ideas for solutions to move forward.”

Rockey hopes that having meaningful conversations will help the community get to the root of issues in Baltimore, so that changes can be made. PNC Bank has previously partnered with CFUF and the founder, Joseph Jones on a number of initiatives. CFUF’s mission is “to strengthen urban communities by helping fathers and families achieve stability and economic success.”

Jones noted that Gray’s death and the events that followed forced people to look at acutely marginalized people and communities of color in Baltimore.

“Fundamentally, we can’t have two ‘Baltimores’ where there are places where people are economically included, and where people are economically excluded. We can’t have overwhelming development in East Baltimore, and relatively no similar development in other parts of Baltimore City,” Jones said. “We also can’t allow people to be sucked into the criminal justice system and released back into the community with criminal records that really exclude them from participating in certain segments of the labor market. We’ve got to look at policies that give people second and third chances.”

Elizabeth M. Nix, Ph.D., assistant professor of history at the University of Baltimore, compiled a summary of nearly 200 years of under-discussed facts about Baltimore’s history.

“This presentation will really start us thinking about the origins of these kinds of two ‘Baltimores.’ Why are there neighborhoods that have held their value and increased in value, and in others there is so much disinvestment? I am not going to ask what is wrong with those neighborhoods I am really going to pose the question about what is wrong with the system that created them. That system of structural racism,” Dr. Nix said, during her slide presentation.

“This is every Baltimorean’s history, and we don’t know about it, and I posit that there’s a reason for that and that’s because it is shameful,” Myers said. “So what is really clear to me from your presentation is the past has implications for our present, and it provides a lot of explanations, not only for why we have concentrated poverty in the black population, but [also] why some people are doing so well in places like Roland Park.”

Pugh remarked that we need to know our history, to understand why we are where we are, and where we can be.

“When we lift the least of us, we lift all of us,” Pugh said.

A survey created by Branden A. McLeod, Ph.D. MSW to gather feedback from attendees about how to move Baltimore forward was distributed.

Results will be shared with subscribers of CFUF’s newsletter. In the future, the taped community conversation will be viewable at: www.cfuf.org.