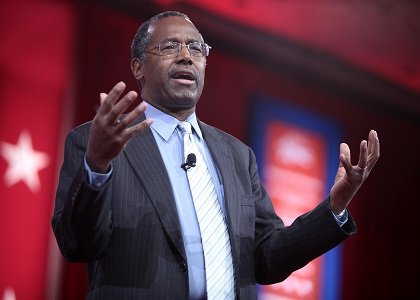 (NNPA) — Special to the NNPA News Wire from The Washington Informer

Republican presidential candidate Ben Carson took an hour out of his campaign Friday afternoon to speak about his upbringing, gun control and cyber attacks from another country.

Carson spoke at a luncheon at the National Press Club in Northwest, which he took the time to promote his new book, “A More Perfect Union: What We the People Can Do to Reclaim Our Constitutional Liberties.”

The retired neurosurgeon from John Hopkins Hospital in Baltimore spoke candidly about why America is the best country in the world, especially with his mother raising him in Detroit.

According to a national Republican poll released Tuesday by Public Policy Polling of Raleigh, North Carolina, Carson remains second behind businessman Donald Trump among the more than one dozen candidates.

During his chat at the National Press Club, Carson said he would go after countries that launched cyber attacks against America. The Obama administration accused the Chinese government this summer of hacking into the files of 22 million federal government employees. China has denied any wrongdoing.

“Under a Carson administration, if another country attacks us with a cyber attack, they would get hit so hard it's going to take them a long time to recover,” he said. “We can't sit around and let people do stuff and just say, ‘You're bad. I don't like you.'”

He blamed the media for taking out of context comments he made this week about how armed Jews in the Holocaust would have “greatly diminished” Hitler's power and the mass shootings at a community college in Roseburg, Oregon.

“Basically, what I said is when tyranny occurs traditionally around the world they try to disarm the people first and that's exactly what happened in Germany,” Carson said during a question and answer period. “With the mass shootings, [shooters] tend to go to places that are gun-free zones. Even though they may be mentally disturbed, they're not so mentally disturbed as not to be able to realize that if you go somewhere where people can shoot you, you're probably going to get shot.”

His comments stem on his support for gun rights, even to allow a retired police officer, military veteran, and teachers to carry guns in schools.

“My position is I would feel much safer if there are people in the schools who have access to arms and who are trained,” Carson said to reporters after the formal discussion. “There could be a host of possibilities. [Mass shooters] go to a gun-free zone for a reason.”