Did Hillary and Bernie connect with black voters? 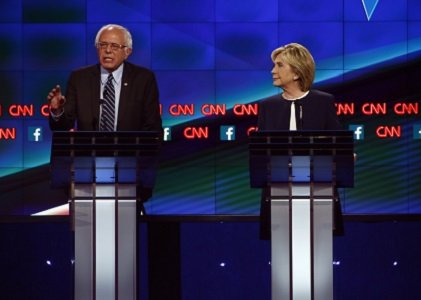 NEW YORK (CNNMoney) — Three little words made a big difference during Tuesday night's debate after a viewer on Facebook asked the Democratic presidential candidates: Do black lives matter or do all lives matter?

Up first was Bernie Sanders, who unequivocally answered "black lives matter," invoking the popular Twitter hashtag that has come to represent a national movement against police brutality and racial and social injustice.

"The African American community knows that on any given day some innocent person like Sandra Bland can get into a car, and then three days later she's going to end up dead in jail," Sanders said. "We need to combat institutional racism from top to bottom and we need major, major reforms in a broken criminal justice system."

Former Maryland governor Martin O'Malley, also used the phrase in his response. "Black lives matter and we have a lot of work to do to reform our criminal justice system, and to address race relations in our country."

Yet, Hillary Clinton and the other candidates refrained from uttering the phrase.

When asked what she would do for African Americans that President Obama could not, Clinton said she would continue the work he has started on reforming the criminal justice system and curbing mass incarceration.

Another part of her plan: to improve early childhood education and housing in black communities. "We need a new New Deal for communities of color," Clinton said.

But black activists didn't think any of the candidates went far enough on the issues.

In an interview with CNN Wednesday morning, Deray McKesson, a prominent black activist with civil rights group Campaign Zero, said the candidates should have spent much more time directly addressing issues affecting blacks and warned Democrats against taking the black vote for granted.

"If we don't start hearing direct language about black lives, then people will just stay home," he said.

In the past few months, McKesson has been instrumental in coordinating meetings between black activists and political candidates, including Sanders and Clinton.

Just last week, McKesson and a group of more than a dozen activists and staffers met with Clinton in Washington D.C. where they discussed the private prison system, demilitarization of the police and mental health services for children.

Despite those advances, McKesson thought Clinton could have said more during Tuesday night's debate. "She's the only candidate of the major candidates on the stage who didn't directly talk about race in her response," he said.

The fact that she didn't say either phrase at Tuesday night's debate resonated with Tory Russell, the co-founder and program director of Hands Up United, a St. Louis based civil rights group.