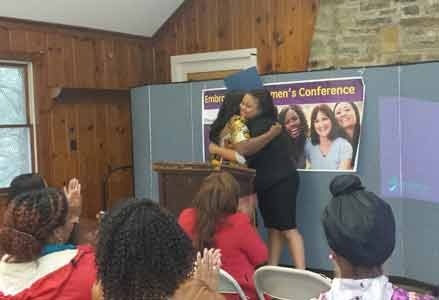 Carisse Lansiquot, a 22-year-old international student at Morgan State University (MSU), is the 2015 recipient of the NextGen Scholarship awarded by P.E.R.K. Consulting. The college junior is the second recipient of the $1,000 scholarship sponsored by the Beltsville, Maryland based advisory firm.

The scholarship assists deserving international and non-citizen students residing in or attending a college in the Washington metropolitan area.

International student Carisse Lansiquot is a chemistry major at Morgan State University. The junior is the recipient of P.E.R.K. Consulting’s NextGen Scholarship to help with school-related expenses. Lansiquot is from St. Lucia in the Caribbean.

Andrena Sawyer, CEO and founder of P.E.R.K. Consulting, says 84 applicants representing 24 countries, including the United States and five continents competed for the scholarship.

Lansiquot’s well-written essay about how much her mother inspired her influenced Sawyer to vote for the chemistry major. Sawyer says a four-person scholarship panel votes to determine who should receive the local scholarship. Along with other factors, Lansiquot’s story revealed what the community can do for international students who need support.

“From her application, Carisse seemed to be a good balance of what it looks like when a student is grounded but when they’re also very gifted. Her application gave us a picture of a very well-rounded student. She was a 4.0 student, but she was engaged in something like six or seven different activities,” Sawyer said.

The scholarship money is intended for a school-related need, such as tuition, books or housing. Lansiquot, who offers mentorship to young women in high school who wish to pursue STEM degrees when she returns to her home in St. Lucia, says she feels blessed to be a NextGen Scholarship recipient.

Sawyer had the idea of starting the scholarship in 2013, when she started P.E.R.K. Consulting, although the philanthropic effort was not implemented until last year. She explained that international students are not eligible for (FAFSA) Free Application for Federal Student Aid, which is a primary source of financial aid for many students. For this reason, a NextGen Scholarship is not available to U.S. citizens.

Sawyer knows firsthand about the lack of resources available for international students.

“I am actually Sierra Leonean. I was born in Freetown. I lived there until I was about nine years old and so when I went to college, my status was an international student, even though I had been in this county for about 10 years at that point. I was still an international student because I wasn’t a U.S. citizen,” Sawyer said. “At our [P.E.R.K. Consulting] anniversary event last year in 2014, we asked people to donate [money], so all of the proceeds from that event went to the scholarship fund. That night we raised about $700. This year we pretty much did the same thing where we allowed people to donate at different events.”

“I felt very excited when I found out [that I was selected as this year’s scholarship recipient] because the money will go a long way in helping me to pay my tuition next semester,” Lansiquot said. “All my family is from Saint Lucia. I am the only one up here.”

In the future, Sawyer would like to see more local students apply for the scholarship. She estimates that an announcement for the open application period will be made through P.E.R.K.’s social media pages and website in mid-February. More information about the NextGen Scholarship can be found at www.perkconsulting.net/about/nextgen.