Marsean Oyler returns to Baltimore with cast of ‘Disney On Ice: 100 Years of Magic’ 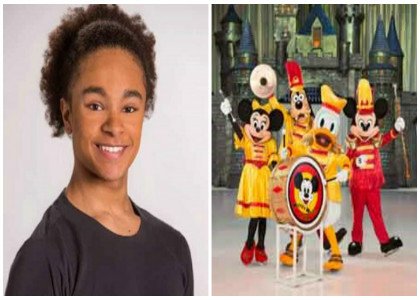 Marsean Oyler is among the cast of “Disney On Ice: 100 Years of Magic,” when the production comes to the Royal Farms Arena in Baltimore on October 28, 2015 through November 1, 2015. (Courtesy photo)

At just 21, Marsean Oyler brings Disney characters and stories to life on ice, along with a cast of talented performers. From October 28, 2015 to November 1, 2015, Oyler will perform at the Royal Farms Arena in Baltimore City in the Feld Entertainment production— “Disney On Ice: 100 Years of Magic.”

If the Knoxville, Tenn. native had not fallen in love with skating at the age of 13, or auditioned live to join Disney On Ice: 100 Years of Magic, Oyler would probably be in school studying to be a nurse anesthetist. Like many young adults Oyler’s age, playing video games, eating out at restaurants, going to see movies and shopping are some pastimes that Oyler considers to be fun.

The part of Oyler’s life that is not typical of most young adults is the rare opportunity to tour all over the United States and internationally, while creating memories that will last a lifetime for audiences who love all things Disney. Oyler is a true performer at heart. Landing a double flip is a favorite memory. It is just one indication of Oyler’s commitment to deliver impressive performances that will make audiences want to return to see the performer wow them again. The skater is willing to earn to a successful career, by doing what it takes to make dreams come true.

“This is my third tour with them [Disney] this year,” Oyler said. “It’s just really great. It just shows that it doesn’t matter where you come from, what you look like or who you are. People come to see the skating and that’s what it’s all about. The come for the performance and the entertainment.”

Oyler has grown accustomed to hitting the road for seven to nine month long show tour adventures with his “tour family.” According to Oyler, being away so long makes returning home that much better, when the time to head back to Tennessee finally arrives.

As a part of the ensemble of “Disney On Ice: 100 Years of Magic,” Oyler entertains excited children who fill arenas for a chance to see their favorite characters brought to life before their eyes. During performances, Oyler often spots adults dressed up as their favorite characters, too. Sometimes they come alone to experience the magic of watching the performers spin, flip, do cartwheels and showcase other daring moves in colorful costumes on ice. Helping families and nostalgic adults relive memories of Mickey Mouse, Minnie Mouse, Donald Duck, Goofy and Disney Princesses, such as Cinderella, Rapunzel requires the combination of unique ability and skill to deliver timeless stories.

“We have something for everyone. It’s a classic show. We have a lot of characters like Pinocchio and a lot more contemporary characters such as Nemo and Elsa and Anna and the whole Frozen gang,” said Oyler, “We really do have a fast-paced, energetic [marching band] opening number that I think everyone will like.”

Learning all of the new choreography when first joining the show was Oyler’s toughest performance challenge. The longtime love of skating helped Oyler to meet the challenge of the new opportunity.

After being introduced to skating, Oyler trained at Knoxville Figure Skating Club and knew that skating professionally was a long-term goal. When the performer’s parents said to choose between skating or continuing to take gymnastics lessons, Oyler chose skating and was well supported by family friends and coaches like Konstantin Baradakov.

The Disney performer advises children who have a dream, or who desire to do something like skating, to work hard and give it their all if it is what they want. Oyler also reminds everyone that it is never too late to find a passion and successfully achieve a dream.

“I started skating when I was about 13. I was a late bloomer,” Oyler said. “My friend was [taking] hockey lessons and he invited me to come with him so I did, and I loved it ever since!”

For more information, performance time and to purchase tickets, call 1-800-745-3000 or visit: www.ticketmaster.com.