Why Ben Carson is beating Trump

Tim Stanley: Ben Carson, whose views are no less controversial than Trump's or other conservatives, is leading in Iowa. Why? 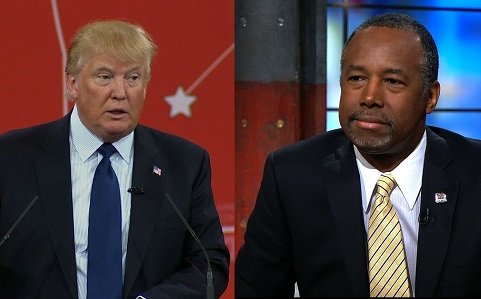 Side by side images of Republican presidential candidates Donald Trump and Dr. Ben Carson. (Photo: POOL/CNN)

(CNN) — Now that the Republican race is a fight between Donald Trump and Ben Carson it feels more explicitly like a reality TV show. "We took a billionaire who hates China and a neurosurgeon who loves guns and made them fight to the death in Iowa. Stay tuned to see what happens next..."

What happened next is that Ben Carson opened up a lead against Trump in the Hawkeye State. And now Trump is turning his blunt wit on the neurosurgeon, calling him "low-energy." What he doesn't appreciate is that this "low-energy" might be precisely what's fueling Carson's rise. As conservative columnist Charles Krauthammer suggests, he is the anti-Trump. People who like conservative populism but can't stand The Donald now have a house-trained alternative.

Of course, liberals will struggle to see the difference between the two. Carson has said that Muslims should be disqualified from the presidency, that the Holocaust could've been averted if only the Jews had been armed and that abortion is like slavery. Crazy, right? Well, any keen observer of the conservative scene will tell you that these are all considered quite uncontroversial.

Anti-Muslim sentiment was aired in the 2012 Republican race, too, and is down to Americans simply not knowing enough Muslims (by contrast, the next leader of the UK Conservative Party could very well be Islamic). The belief that the confiscation of weapons was critical to Hitler's dictatorship is a well-established right-wing theme. Finally, the view that abortion is like slavery was articulated by conservative---and former presidential candidate--Alan Keyes way back in his 2004 senate race against Barack Obama.

Note that Carson also uses the slavery analogy to attack Obamacare. It is commonly argued by conservatives that a) the Democrats were once the slavery party and b) they've transferred their authority from the plantation to the welfare state. Religious conservatives have a long, long history of opposition to eugenics and, again, see a seamless evolution from Southern racist laws to the modern family planning movement.

So Carson's views come from the heart of the conservative movement.

What's unusual is his personality. Polling shows Carson leading on the matters of honesty and temperament. He has the soft-spoken bedside manner of the very best doctor -- imagine those steady hands hovering over the nuclear button compared with Trump's waving, shaking, itchy fists. The Carson biography is pure Americana, from zero to hero in one generation. That he was a bad boy in his youth only fits better with the evangelical narrative of a man saved by grace.

As the New York Times reports, he speaks to people in a friendly, respectful way that builds trust. Peter D. Hart, a wise pollster, is quoted as saying: "Trump is rough; Carson is reassuring. And the unknown elements of Carson are reassuring, and the known elements of Trump are disturbing."

Finally, there is the matter of his race. Mainstream conservatives are not, as liberals suspect, congenitally racist. On the contrary, they share the Left's eager desire to find and elevate heroes from nonwhite backgrounds. The Right has waited a long time for a black leader to make it in national politics.