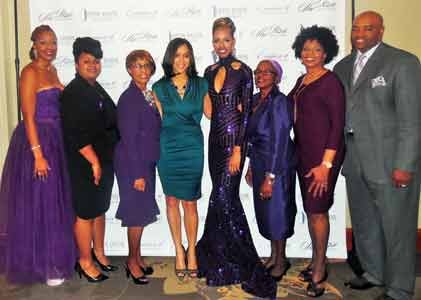 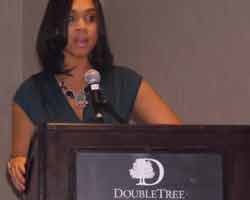 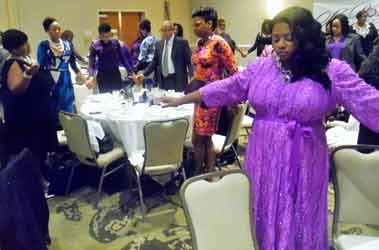 Honorees joined hands and prayed with event attendees at the second annual She Rose Awards, during Domestic Violence Awareness month. 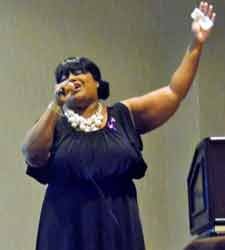 Carrone Jones sings a moving song during the event. 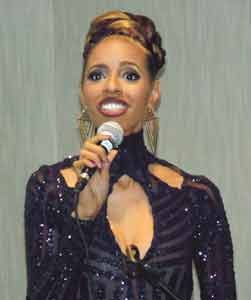 Lakita Stewart-Thompson, founder of National Association of Mothers and Daughters United Worldwide, Inc. (NAMADUW, Inc.) was honored as an unsung organization founder. Through NAMADUW, Inc. the advocate creates better situations for women and girls who are suffering from crisis or tragedy. Fostering better bonds between mothers and daughters is also a part of the organization’s mission.

Along with prayer, spoken word and a performance by award-winning singer Carrone Jones, Mosby set the tone for the honorees to honestly recount their personal experiences as victims of domestic violence. Each honoree spoke in front of the sold out crowd of 87 after Mosby delivered her inspiring message that intertwined sisterhood, her own uphill battle achievements and faith-filled lessons.

“When I look around this room at all of these beautiful survivors, I see power not pain. I see triumph not suffering. I see pride not pity. I see courage not fear,” Mosby said, during her keynote speech. “You all have turned tragedy into testimonies. It’s nights like these and movements like the She Rose Awards that are shining a bright light on the survivors who are not victims. When you share your stories and your testimonies with the rest of the world, when you provide proof that there is life worth living after emerging from your own personal hell, you’re doing God’s work.”

Founded by LaQuisha Hall in 2014, the first She Rose Awards honored survivors of sexual assault. Since it’s inception, Open Door Fellowship Church in Radallstown has partnered with the awards. This year, 21 volunteers helped to uplift domestic violence survivors, while assisting Hall. By day, Hall works as a teacher in Baltimore. The author, beauty queen, inspirational speaker and mentor also empowers young ladies through Queendom T.E.A. (The Etiquette Academy).

“I started She Rose Awards because I know the power of someone sharing their testimony and how it can help them to progress in life. I had that experience years ago. I told my story of surviving incest for the first time on a pageant stage but of course not everyone is going to be in a pageant, so I had to create that stage for other people to come forward. Beginning last year, we looked for people who have survived sexual assault and domestic violence, but haven’t exposed it yet. So that’s the goal,” Hall said.

Hall further remarked that she uncovered her own confidence during her marriage. Mardis Hall, her husband of 10 years, supports LaQuisha’s passion to advocate for other sexual abuse and domestic violence survivors.

“This is a grassroots movement, not unlike some across the country that is about putting a voice to a people, and then promoting a ‘we’re not going to stand for it attitude,’” said Mardis while welcoming attendees to the 2015 She Rose Awards.

Mosby’s message underscored the belief that domestic violence survivors should not be ashamed to share their success stories with others.

“All too often in our communities we deal with these issues [in silence]— whether its sexual abuse or domestic violence. We’re ashamed to share our testimonies but sharing our testimonies can save somebody’s life,” Mosby said. “It’s very important to do that to change the trajectory of young people coming behind us, so we’ve got to cast our fear, our anxiety, our guilt, our shame aside and make sure that we’re getting to these young people and making sure that they’re not going down the same path that we did.”

To learn more about the She Rose Awards, visit: visit www.sheroseawards.com.