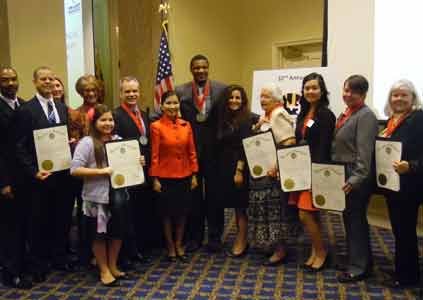 BALTIMORE — Adam Jones is the well-known All Star center fielder for the Baltimore Orioles. However, his outstanding volunteer work is often done on his personal time when the media is not present. During the 32nd Annual Governor’s Service Awards held at the House Office Building in Annapolis on Monday, October 26, 2015, Maryland’s First Lady Yumi Hogan joined the Maryland Governor’s Office on Service and Volunteerism, and the Office of Community Initiatives, to publicly recognize volunteer groups and individual volunteers like Jones who are making measurable differences in Maryland.

Jones, an alumnus of the Boys and Girls Club, was a special guest and honoree and was recognized for his volunteerism at the event. The athlete is a sponsor of OriolesREACH, which provides complimentary tickets for underprivileged youth to attend Orioles games. Jones and OriolesREACH donated $75,000 to help build a teen center for Boys and Girls Clubs of Baltimore. By the end of this year, Jones will have helped to refurbish three Boys and Girls Clubs locations. He also serves as honorary chairman of the Y of Central Maryland’s Send a Child to Camp campaign.

“Everyone’s here for one reason, and that’s to give opportunity, to help our youth, which obviously are our legacies. I have a son now, and another one on the way, so I am trying to understand the real meaning of a legacy,” Jones said at the program. “I want my kids, nieces and nephews to grow up and know that I was a person of change, of impact.”

“I saw the story that was being told and it was not our story. It wasn’t the Baltimore that I knew. I knew it was only one side to the story. It was a lot of ugliness that the world was seeing but, there was more to everything that was kind of happening,” Butler later said. “I told my sister I can’t let this be the backdrop the story.”

Michaela Smith, 14, who serves Baltimore through volunteerism, was a 2015 youth award recipient. After her mother was diagnosed with cancer, she started Hairbands for Hope. She made and sold hair bands, then donated the proceeds to Susan G. Komen Maryland. Michaela later donated 22 bags of school supplies to children whose parents are undergoing cancer treatment.

Steven McAdams, executive director of the Governor’s Office of Community Initiatives, told awardees that they are helping to improve Maryland.

“You’re touching lives,” McAdams said. “You’re addressing a need, and it is so important that we honor you today, because most people who are giving, they are not takers, so most people do not want the recognition. But we want to let you know that Governor [Larry] Hogan knows you’re here.”