A community garden grows in Pigtown 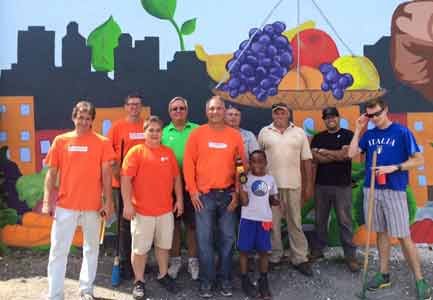 BALTIMORE — It takes a village to raise a child, according to an ancient proverb and for two local, civic-minded individuals, it takes a good garden to help feed a family and to keep a neighborhood growing.

Bill McLennan, the executive director of the nonprofit Paul’s Place; and Darrin Fiorrini, manager of the Cockeysville Home Depot have joined together to build a vegetable garden that will be run by the South Baltimore-based “Pigtown Food For Thought,” a community group that strives to improve access to healthy food and raise consciousness about food injustices.

“Darrin expressed great interest in getting involved with Paul’s Place as he grew up in the Washington Village/Pigtown neighborhood and has a connection to the community,” said Adrienne Peres, vice president of Abel Communications and a spokesperson for the vegetable garden project. “Darrin came down to Paul’s Place for a tour a few weeks ago and he was very impressed by the work that Paul’s Place does in the community and he was able to donate several items from Home Depot that would support the garden.”

On Friday, August 28, 2015, officials from Home Depot and Paul’s Place started the work they hope will prove to be both healthy and refreshing for a community largely starved for good food.

The project began with several volunteers working feverishly to build shelves for a gardening shed. The volunteers then performed tasks like weeding; before they began to develop a much-needed composting system that will help grow the vegetable garden which officials say will provide fresh produce for Pigtown residents.

Mclennan says the greatest success of Paul’s Place— an organization that also provides programs and support geared toward fostering hope, personal dignity and growth— is its ability to connect people from different backgrounds while channeling that energy into improving Southwest Baltimore.

“We focus on our mission and develop strong collaborative partnerships,” McLennan said.

The vegetable garden will assist in bringing healthy food to the area and help to bring residents together, Home Depot and Paul’s Place officials said in a joint statement.

For residents of Pigtown, fresh vegetables haven’t been easy to come by— at least not within a suitable distance— since Safeway Supermarket vacated the area five years ago relegating the neighborhood to the status of food desert.

The U.S. Department of Agriculture defines a food desert as an urban or rural neighborhood that lacks easy access to fresh, healthy and affordable food. Health officials have noted that those who live in such areas usually have higher levels of diabetes and obesity.