'Empire' fans sing their way into chance to appear in season 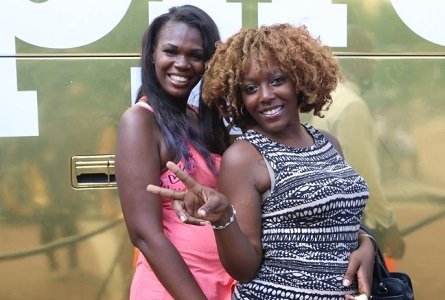 ATLANTA (CNN) — Whether they're Team Cookie or Team Boo-Boo Kitty, it's no secret that fans love "Empire," the hit Fox TV show breaking records and winning over critics with its blend of love, hip-hop and unvarnished family drama.

"Empire" fans are auditioning for a cameo role in the show's second season. The show's tour bus is stopping in 16 U.S. cities.

About 16.7 million viewers tuned in for the March 18 season finale, capping 10 weeks of consecutive audience growth, a rare television feat. It was also a huge hit on social media, generating 2.4 million tweets and 15.8 million likes, comments and shares on Facebook over the two-hour show.

The show, which features gay and lesbian characters, also contributed to the high marks Fox received from GLAAD on its annual Network Responsibility Index, recognizing diversity in media representations of the LGBT community.

It takes a special breed of fan to wait five hours outside a tour bus under the blazing Atlanta sun to experience a taste of "Empire." It was the 10th stop on a 16-city tour offering fans a chance to audition to appear on the second season.

We're not even talking about a chance to meet stars Terence Howard and Taraji P. Henson, aka Lucious and Cookie Lyon, or their dueling sons. Lucious is the patriarch bent on grooming an heir to his Empire Entertainment; Cookie is his ex-wife, an ex-convict who's equal parts heroine and villain, often locking horns with Lucious' girlfriend, Anika (Grace Gealey), whom she contemptuously calls "Boo-Boo Kitty."

Instead, up for grabs: recording a song from the show's original soundtrack to submit to Fox for a chance to appear as an artist in season 2, which begins September 23.

Sure, the aspiring artists could have just submitted their audition clips online and skipped the sweltering heat. But then they would have missed out on the complimentary "Empire" bags and cookies bearing Cookie's visage, and the spontaneous freestyle sessions.

In a testament to the show's devoted fan base, people began lining up about 10 a.m. on a recent Thursday outside the mobile recording studio parked in Atlanta's Centennial Olympic Park. The line was cut off about noon. In two days, about 700 people entered the bus to record; 200 of them were selected for entry in the contest.

"I usually laugh at people who do this kind of stuff, but now I'm one of them," said Angel Hines (who is Team Cookie, by the way), laughing as she inched her way to the front of the line.

"I wanted to be a part of this. I'm here for the experience. I watch the show religiously, so why not? Until I get my spot, this is as close as I'll get."

She would be singing "What is Love" by Veronica Bozeman, aka V., the song that opens the season premiere. It was one of five that contestants could choose from.

Jacqueline Jones felt she would make a better impression in person. Another Cookie fan, Jones says the show "hits home" for a lot of people.

"I can relate to it all," she said, smiling as she waited on the tour bus for her turn to enter the recording studio.

"So many people live these situations. We know how many women go to jail to protect their man or take a bullet for their man. Or maybe you don't have a Cookie in your family, but you may have a gay person or someone who suffers from mental illness," she said, referring to the Lyon family drama.

"A lot of the show is fictitious, but the stories are real."

And with that, she disappeared into the booth. Her song: "What is Love?"