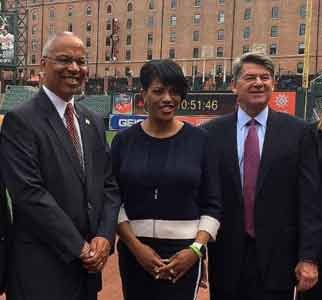 Lt. Governor Boyd K. Rutherford was joined by Baltimore City Mayor Stephanie Rawlings-Blake at the launch of the “Maryland Grand Slam in Baltimore City,” a $3 million program to build stronger communities in Baltimore through homeownership at Oriole Park at Camden Yards on Wednesday, September 2, 2015.

Using $2 million from the state and $1 million from the city, Maryland Grand Slam in Baltimore City will help an estimated 400 homebuyers increase their purchasing power through the Maryland Mortgage Program, the state's premier home loan product.

"Maryland Grand Slam is exactly the kind of initiative we need in Baltimore," said Lt. Governor Boyd Rutherford. "This program will provide families with the opportunity to create a lasting financial legacy for their children and their children's children."

"Innovative programs like this will make it easier for families to buy homes and grow with Baltimore. This milestone collaboration will be unique in the way it combines state incentives with our already successful Baltimore Homeownership Incentive Program to ensure that more people put their roots down right here in Baltimore and strengthen our diverse neighborhoods," Mayor Rawlings-Blake said.

The program is modeled after DHCD's highly successful "MMP TriplePlay Initiative in Prince George's County," which sold out a few months after it was launched last year and resulted in more than 400 new home owners in the county, 87 of whom moved from outside of Prince George's through the program.

However, where the TriplePlay initiative offered prospective homebuyers three incentives to purchase in Prince George's County, the Grand Slam initiative features four incentives for those seeking a home in Baltimore, including $7,500 in down payment assistance grants. The four benefits of Maryland Grand Slam in Baltimore City are:

*$5,000 for down payment assistance in the form of an outright grant from the state. The Hogan administration has allocated $2 million from Maryland's rainy day fund for this initiative.

*$2,500 for additional down payment assistance from the City of Baltimore, also in the form of a grant.

*A federal tax credit through the Maryland HomeCredit program that can save the homeowner tens of thousands of dollars over the life of the loan. In addition, Maryland is waiving its usual fee for a savings of as much as $450.