John Harbaugh says Ravens rookie receiver Breshad Perriman has a chance to play this week but it’s not likely.

A lot has been made about the absence of Baltimore Ravens rookie wide receiver Breshad Perriman. As a first round pick, the instant return on the investment is something that everyone would like to see. Unfortunately, Perriman hasn’t practiced since landing on his knee on July 30th, the first day of training camp. The return of Perriman is something that Ravens head coach John Harbaugh seemingly has to address at each press conference. 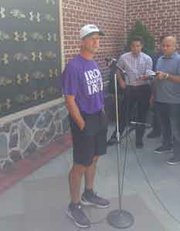 The Ravens took part in their first regular season practice on Tuesday. Harbaugh spoke to the media prior to the practice and addressed the latest update on the Perriman situation. “I saw the reports [that said]: ‘He has a chance,’ and I was like, ‘Yes, he has a chance.’ I think I was pretty clear.” Harbaugh said. “It’s probably not a real big chance, because he hasn’t practiced.”

It’s pretty safe to say that Perriman will not make his debut in Denver against the Broncos for the season opener. Exactly when he returns is anyone’s guess. Perriman was originally said to be day to day but that has mushroomed into missing all of training camp and the preseason. The first step is to get the rookie receiver back onto the practice field. From there, he still has a long way to go before he can really contribute to the offense.

There will still be a waiting period for Perriman even once he comes back to practice. As a prospect, Perriman is a very raw receiver. He did take great strides as far as his stance and route running during OTAs and mini-camp. The rookie receiver learned how to be more balanced in his stance at the line of scrimmage thanks to wide receivers coach Bobby Engram. That gives him more power and explosiveness coming off of the ball. He is also learning how to sink his hips and drop his weight which helps getting in and out of breaks.

The team hasn’t announced any expected date for Perriman’s return. “I don’t have a timeframe from the doctors. I don’t think it’s tremendously far down the road, or we would have done something else with him, as far as his status.” Harbaugh said. “When he comes back to practice, that’ll probably be a pretty good indicator that he’s going to be in the lineup pretty soon”

It will take time for Perriman to get readjusted to the endurance that is required to play the receiver position. Yes, Perriman has top level speed but he still needs to get reps that will allow him to get into game shape. The Ravens targeted him frequently on deep routes during team and 7 on 7 periods. Rest assured that Perriman will be required to run his share of nine routes when he does come back. The team selected Perriman to be their deep threat.