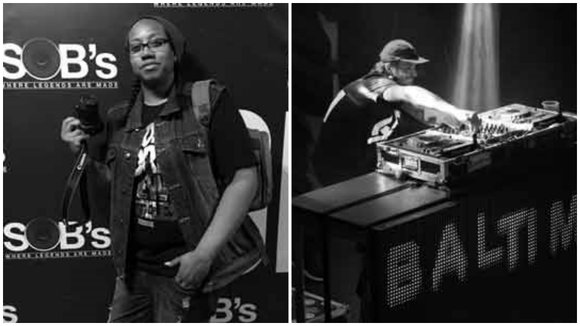 It’s a bit of a struggle for Renita R. Clarke to come up with a short list of her favorite artists. Herb Ritts; Jonathan Mannion; Chan Andre’; Jemal Countess; and even her dear friends and mentors Leslie Alessandro and Mike Quain can’t be forgotten, she said.

However, for anyone planning to attend Clarke’s first open exhibit on Sunday, September 20, 2015 at the Red Lion Hotel in Baltimore, she might just make a few lists with an array of photographs taken during visits to some of her favorite local venues.

Clarke’s Exhibition “Rams Head in Black & White” features photographs of concerts and events she has covered as a photographer at Rams Head locations like Rams Head Live in Baltimore and Rams Head Onstage in Annapolis.

“Being born and raised in Maryland, Rams Head was the go-to spot for me growing up and seeing concerts and great local bands,” Clarke said. “I was so excited to be able to shoot at venues in which I grew up, so this is why I decided to make my first exhibit about some of my favorite moments from the Rams Head Group venues.”

The exhibit features Clarke’s photographs of events including the Sundance Film Festival, the Tribeca Film Festival and various concerts held at Rams Head.

Clarke has worked with such high profile clients as Pepsi, YouTube and BET.

“I’ve been passionate about photography since 1993, when I tinkered with an old Kodak box camera that I came upon,” she said. “After a period of shooting, exploring and self-learning, I turned what was once a hobby into a career.”

When Clarke photographs a subject, she says her goal is to always capture the moment that evokes some sort of feeling or emotion. She also says that it’s important because everyone comes away satisfied, including the photographer.

“I want the person or the audience to come away with a complete experience. This makes the end product worthwhile,” she said.

With the launch and new partnership with “Studio Tre’ 154 Production,” Clarke said she will be able to expand her love for photography to videography as an added medium.

“I love people and movement. I love people watching and that’s why I love shooting people because you can catch a great moment with one single word spoken,” Clarke said, adding that she next plans to work on a photo book that will feature her favorite black & white images that she’s shot throughout the years.

“I’m excited about the future,” she said. “I’m looking forward to the next image creation experience.”

The Rams Head in Black & White Exhibit, which is free and open to the public will be held at the Red Lion Hotel, located at 207 E. Redwood Street in Baltimore.