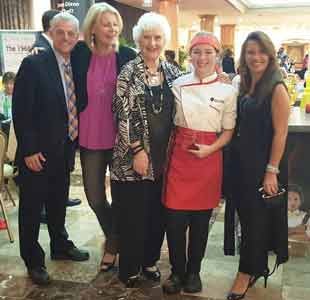 ANNAPOLIS — Martha Walton of Gibson Island was named the first recipient of the Clark Raines Rising Star Award at the Mason-Dixon Master Chef Tournament on Sunday, August 16, 2015. The award recognizes Walton, who was part of the winning My Thai team, as an up-and-coming sous chef.

Walton was the prep Martha Walton of Gibson Island was named the first recipient of the Clark Raines Rising Star Award at the Mason-Dixon Master Chef Tournament on Sunday, August 16, 2015.cook under Chef Jirat Suphrom-In in the competition. She is majoring in Baking and Pastry Arts in the Hotel, Culinary Arts and Tourism (HCAT) Institute at Anne Arundel Community College. The other member of the My Thai team was the sous chef, Zach Le Doux, who graduated in May with honors from the HCAT culinary and baking programs.

Walton, who is the student representative on the HCAT Advisory Committee, also is majoring in horticulture and landscape design, planning to use knowledge from all three majors to create a sustainable baking and pastry shop. She has received awards for her cakes for the past two years at the National Capital Area Cake Show in Virginia.

Le Doux also aspires to be an entrepreneur, planning one day to open a sustainable Italian restaurant. Before graduating from AACC, he participated in the HCAT Italian Culinary Internship working one summer in a restaurant along the Amalfi Coast in Italy to get firsthand experience with Italian cooking processes.

The Mason-Dixon Master Chef Tournament, which was set in Baltimore this year, is the largest culinary competition of its kind in the Mid-Atlantic. The Clark Raines Rising Star Award was named after longtime tournament sponsor and advocate Clark Raines, who died in the spring. Erik Folkart, CEO and emcee of the Mason-Dixon Master Chef Tournament, said Raines recognized potential in people and often helped them realize their goals, so the tournament felt creating this award would be a proper tribute to that legacy.