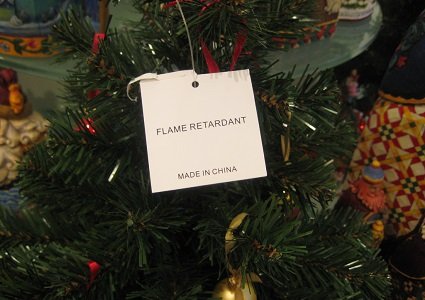 Artificial Christmas trees are one of many household items that contain toxic flame retardant chemicals. (Photo: Angus Fraser/CC BY 2.0)

Consumers aren’t looking for health problems when they shop at dollar stores or keep older furniture, but a cocktail of chemicals seeping from these items offer exactly that.

From lead and mercury to fire-resistant chemicals, these substances have been generously mixed into the manufacturing process for decades, contributing to a host of illnesses, disorders, and public health issues. And according to small-sample studies from Duke University, University of California-Berkeley, and the Centers for Disease Control and Prevention, Black and Latino children are born with, and/or later absorb, twice the level of blood contamination as White children.

Scientists aren’t sure why.

“What we have seen is there’s a higher incidence of learning disabilities with lead, and that’s already been proven,” said José Bravo, executive director of Just Transition Alliance, a labor and environmental activist group. “African Americans and Latinos bear the brunt of the effects of lead. So when you hide it in products in the dollar store…we are concerned, because we know dollar stores target our communities.”

Based in San Diego, Calif., Bravo also serves as the national coordinator for the Campaign for Healthy Solutions, an effort to encourage discount stores to adopt safe products and practices. This year, the group issued a report on dollar store health hazards, in which they tested discount products purchased across California, Kentucky, Maine, New Mexico, Texas, and West Virginia, from the nation’s four largest dollar store chains (Dollar General, Dollar Tree, Family Dollar, and 99 Cents Only).

Of the 164 items tested, 81 percent had at least one toxin at levels above the informal but widely accepted norm. These toxins – which include lead, polyvinyl chloride (also known as PVC plastic, or vinyl), and phthalates – are used to protect the product from wear-and-tear, or maintain its colors or textures over time. But these substances have been linked to immunity and hormonal disorders, infertility, cancer, learning disabilities in children, and more. Further, the toxins can pass from mother to infant via breast milk and the umbilical cord.

Furniture can also be a hazard.

The requirement was made optional in 2013. Furniture must now bear tags that say “TB117” – meaning, there are almost certainly flame retardants in the foam – or “TB117-2013” plus an explicit statement confirming or denying the agents.

These agents are known carcinogens and toxins. Today, they can be found in everything from carpets to clothing, cribs and Christmas decorations.

“The goal of the flame retardants is to give you a little bit of extra time [in a fire],” said Eve Gartner, a New York-based staff attorney for nonprofit environmental justice/advocacy organization, Earthjustice. “The California standard…required that the foam part of the furniture could withstand a small open flame for 10 seconds before your chair goes up in flames. But studies showed [the chemicals] don’t really give you that extra time.”