Ben Carson, rise of the anti-Trump

He is nearly tied with Trump and is behaving like "a gentleman, not a jerk" 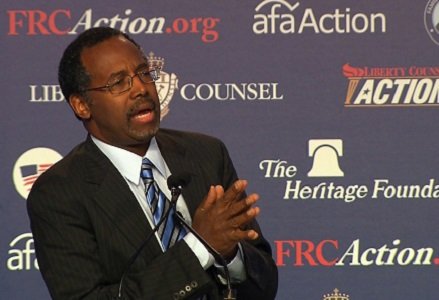 Ben Carson, a renowned neurosurgeon and a popular figure among conservatives. CNN

(CNN) — How do you go from being an internationally respected surgeon, to a conservative folk hero, to nearly edging out Donald Trump in polls for the GOP presidential nomination?

The rise of Ben Carson is a fascinating case study in grassroots cultivation that's resulted in strong support among evangelicals and women, reflected in the most robust small donor base in the 2016 race. And in the summer of Trump, he's done it by being a gentleman, not a jerk.

Call him the anti-Trump -- understated, consultative and substantive. Polls show that it's working: the latest New York Times/CBS poll shows Carson tied within the margin of error with Trump.

Carson's rise began when he bashed President Obama's signature policy achievement in front of his face at the 2013 National Prayer Breakfast, landing a book deal and embarking on a tour that he's managed to successfully transform into one of the GOP's most formidable online fund-raising machines.

Without the benefits of broadcast television, or the political infrastructure befitting a governor or United States senator, Carson took his book tour as lead time to build a national online fund-raising apparatus beginning in 2014. That May, Carson began a road show throughout the heart of the evangelical South -- North Carolina, Georgia, Tennessee, Florida, Alabama, Mississippi, Texas -- which culminated with four stops in Iowa. And when you look at his last Federal Election Commission report, you can see it paid off. The states from which the most contributions came are -- you guessed it -- Texas, Georgia, North Carolina, Alabama and Iowa, for a total of more than $10 million in small donations.

Carson has bragging rights to one of the most robust fund-raising lists of the GOP field, though bragging is not his thing. According to Phil Musser, chairman of the digital media agency IMGE (which is unaligned in the GOP race), "Carson quietly built an online fundraising and grassroots leviathan in 2014 and 2015. That has helped him successfully raise small dollar money like no other contender for the GOP nomination. It's a major asset to his candidacy, and will prove to be a very smart early investment that powers his candidacy late."

Carson's support, especially in states like Iowa, is strongest among Christian evangelicals and women. His enthusiasm numbers in that state are higher than Trump's. Carson has eclipsed Mike Huckabee, Sen. Ted Cruz and Rick Santorum as the viable moral majority candidate for 2016.

Ben Carson has what Iowa caucus-goers favor -- the soft touch and outsider status, and no fear of going after Obamacare and the excesses of Washington. In a time where the middle class is squeezed by stagnant incomes and rising health care costs, Ben Carson looks like he cares. In Iowa, he speaks to Rotary clubs and banquet halls, and has been there for more than 12 months -- not just helicoptering into the Iowa State Fair, but taking the time to get to know the folks. That's the difference.