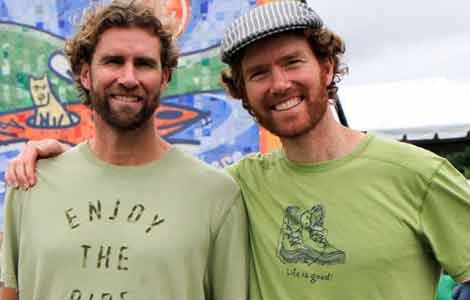 When John Jacobs and his brother Bert started selling T-shirts out of a van 20 years ago, neither could envision that their message of “Life is Good” would lead to a $100 million enterprise and act as a catalyst to help encourage and support those who maybe facing the difficulties that every day life poses. 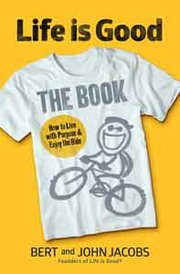 John Jacobs stopped in Baltimore as part of their “Life is Good” book tour, an eight-week experience where the brothers are rallying communities around the country to focus on the good in the world and to support children who need it most.

They plan to visit more than 40 communities, including Los Angeles, New York, and Washington, D.C., on a mission to help residents discover, embrace and spread optimism.

The tour coincides with the release of the brothers’ new book, “Life is Good: The Book: How to Live with Purpose and Enjoy the Ride.”

“My mother always had a positive attitude and she’s our biggest influence,” Jacobs said. “Our business is very much based on retaining a childlike sense of joy and wonder at the world. I know that can sound corny but going to work, and thinking of it as a ‘get to’ rather than a ‘have to.’ You don’t have to go to a meeting; you get to go to a meeting because you have a job that pays you. You don’t have to go buy groceries when you get home because we live in a land of abundance and you have legs. That’s really a mindset shift.”

The brothers’ “Life is Good” brand started in 1994. They were traveling across the country in a van with less than $100 and a bunch of T-shirts that featured a stick figure whom they named “Jake.”

“We just thought something was going to work and then it hit us,” Jacobs said. Now, the business has grown into a $100 million enterprise and that’s without the traditional approach of billboards and big magazine ads, but their dependence upon everyday people to spread the word.

The company grew as the brothers expanded to sell a full line of clothing for men, women and children. Their popularity easily measured by the millions of social media friends and followers and for their desire to help young people by mentoring and teaching them about life.

At least 10 percent of the company’s profits are donated to kids in need through the Life is Good Kids Foundation. They also provide resources for childcare professionals by way of the Life is Good Playmakers, an organization that partners with teachers, social workers and child specialists to help children overcome poverty, violence and illness.

“Kids are the ultimate optimists,” Jacobs said. “Our nonprofit helps kids overcome poverty and illness. We’re visiting a lot of nonprofits that our nonprofits have trained as Life is Good Playmakers and donating to other nonprofits that do similar work with kids.”

“The childcare workers are the heroes that are on the front lines everyday. We get to thank them in person and encourage them to keep doing the heroic work that they’re doing. That’s extremely fulfilling. It’s one of the ultimate rewards, seeing the fruition of the nonprofit work and the fruition of the message we’re trying to send.”

The new book also carries the message of optimism. The brothers describe it as a book of wisdom that celebrates the power of optimism. It chronicles the personal and professional journeys of the Jacob brothers from their upbringing in Boston to their unlikely success.

They illuminate what they identify as ten key “superpowers” that are accessible to everyone: openness, courage, simplicity, humor, gratitude, fun, compassion, creativity, authenticity, and love.

The 271-page hardcover book is published by National Geographic, and includes inspirational stories from letters that they’ve received over the years.

“We wanted to share stories, not only our own but of the Life is Good commu nity,” Jacobs said. “We learned early on to listen to people, and that has carried us. The letters …We found that optimism is at its most powerful in the darkest of times.”

The book is available at most retailers including amazon.com and barnesandnoble.com. For more information about the brothers and their company, visit: www.lifeisgood.com.