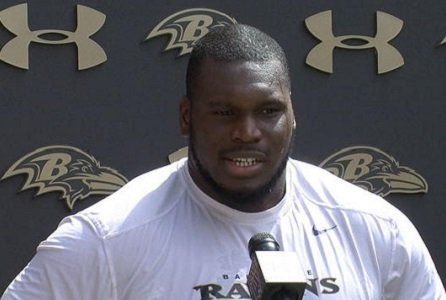 The Baltimore Ravens offensive line is one of the more stable units of the team. When healthy, the team arguably has the best line in the NFL other than the Dallas Cowboys. One of the key offensive linemen on running plays for the Ravens— especially for the interior runs— is Kelechi Osemele who is in a contract year and has a goal of making the Pro Bowl in 2015.

Osemele is completely healthy and ready to go for it all in his fourth NFL season. There was a time when playing football was in question for the young lineman. He missed nine games after suffering a back injury in October of 2013. He continued to play with the injury for almost a month but was placed on injured reserve on November 8, 2013.

The Ravens training staff had to force Osemele to scale back his rehab workouts because he was doing too much to get back in shape for the following season. This work ethic was instilled in Osemele by his mother, Imelda. She worked four jobs to take care of her four children because their father moved back to Nigeria to start a business when the children were very young. Kelechi saw his mother come back from work exhausted from the long hours that she put in.

Osmele used to imagine being able to make life easier for his mother when he was younger. He only had two goals when he was growing up, but they were tied into each other.

“The two big things that I wanted to do when I was a kid were to play in the NFL and buy my mom a house. That’s what it’s been about for a long, long time.” Osemele said.

He reached his second goal during the off-season when he bought his mother a large house in the Houston suburb of Katy, Texas.

Meeting goals is something that Osemele has plenty of experience with. He has now set his sights on a new goal, to be named a Pro Bowler. The timing of the goal is perfect as he is playing for a new contract this season. The idea of being recognized as one of the best at his position is frequently on Osemele’s mind.

“If I’m honest, it is something I wake up thinking about every morning, so it’s important to me. I’m not going to shy away from saying it’s definitely a goal of mine and something that I’m working towards.” Osemele said. “But obviously, winning is what matters the most, so I think if I listen to Juan [Castillo] and work on my technique and the things that I need to, I think everything else will take care of itself.”

Even though the Ravens have a new offensive coordinator in Marc Trestman, they will still utilize many of the zone running plays that worked so well for the team last year. Making a mark as a top offensive lineman will take plenty of hard work but requires good coaching as well to maintain technique and make adjustments when needed.

The Ravens opened the season against the Denver Broncos and struggled to run the ball, only gaining a total of 73 rushing yards in the game. Osemele and the offensive line will have their hands full against Khalil Mack, Justin Tuck and the Oakland Raiders on Sunday, September 20, 2015. The Ravens will look to rebound this week, and Osemele’s ‘play until the whistle’ mentality will play a larger role in getting the running game back on track.