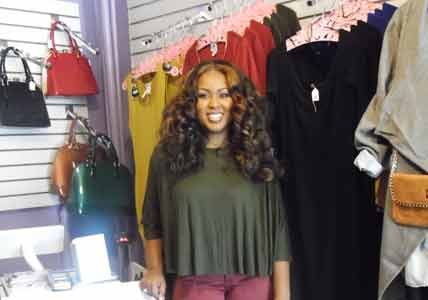 Taylor Alexander’s store Flawless Damsels was completely destroyed after unrest erupted in Baltimore in response to Freddie Gray’s death earlier this year. With hard work, determination and the help of a forgivable loan from the Baltimore Development Corporation, she reopened the store on August 29, 2015. (Photo: Andrea Blackstone)

Shortly after graduating from Bethune-Cookman University (B-CU), she put her Business Management degree to use. An online business that she started in college selling waist trainers and diet plans led to the addition of a storefront location. The ambitious entrepreneur maxed out her credit cards, and wiped out her savings account to finance opening Flawless Damsels Boutique, located at 2414 E. Monument Street in Baltimore City.

Despite a strong start, Alexander was forced to close her small business on April 27, 2015. Boards on the windows served as a reminder of riots that erupted after Freddie Gray’s death. The damage sustained at Flawless Damsels Boutique was assessed at over $60,000. The store was Alexander’s sole source of income. She lost everything, including the computer that houses her business records. Flawless Damsels Boutique was one of nearly 380 businesses that were damaged in Baltimore.

“My business was vandalized and looted during the riots for Freddie Gray. It’s been almost four months. I’ve had to completely close because they [looters] took all of [the] inventory, broke the windows and the doors. I had to completely rebuild from the ground up,” Alexander said. “I always wanted to come back and conduct business here. I didn’t take anything that happened personal. I just decided to get back to doing what I love.”

Alexander remained optimistic that she would reopen, although she was unsure how she would persevere. Customers and community supporters showed up to help dispose of glass and broken items before the building was secured. Donations of goods, services and more than $6,250 raised from a Gofundme campaign were some of the personal resources offered to help Alexander begin to pull everything back together. However, a forgivable loan awarded by the Baltimore Development Corporation (BDC) was the resource that has allowed Alexander to get a fresh start. She was also offered free counseling from

Evidence of Alexander’s resilience was apparent during the joy-filled grand reopening. The store was well stocked with clothing selections and accessories leading up to the fall season.

“Some people are more excited than I am,” Alexander said, during the event.

Well-wishers like Mary Aikins-Afful streamed in with smiles and hugs as a deejay played upbeat music. Aikins-Afful reportedly met Alexander while walking at Lake Montebello in Baltimore with a small group of people. Alexander told them about the grand opening. The gracious supporter was one of Alexander’s first customers.

Theresa Ervin, CEO of the modeling agency and Bell participated in the reopening of Flawless Damsels to support Alexander, who is a fellow member of a sister circle of supportive business owners.

Ayana Howard, 22, a senior who attends Lincoln University grew up with Alexander said, “It is very impressive to see a young woman work this hard for something she really loves. She didn’t think twice about stopping the store. She got right back on her feet. I am very proud of her.”

Howard works at Flawless Damsels when she is not away in college. She remarked that Taylor worked very hard to open her store after graduating from B-CU.

Alexander was overwhelmed by all the support that she received. The resilient business owner is grateful for the blessing of a new beginning.

“Baltimore—I just want to say thank you,” Alexander said, referring to the outpouring of support.