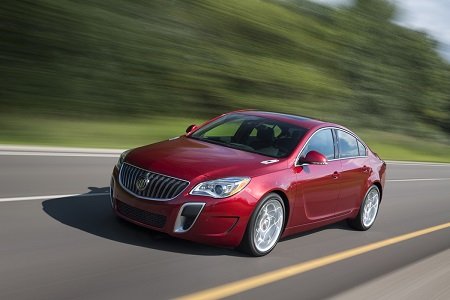 DETROIT (NNPA) — Buicks no longer look like Buicks of yesteryear and when it comes to the Buick Regal GS, that fact is particularly evident. The Regal was recently ranked best sport sedan by Consumer Reports and selected a recommended buy.

For 2015, the sedan has a built-in Wi Fi hotspot and three new exterior colors, none of which we had. We were “stuck” with copper red metallic and a black interior. That was just fine with us. And by the way, it was just fine with everybody who gave us a thumbs up in this car.

What set the Regal GS apart was the color and the sheet metal. It was lower and it had a unique front and rear fascia. In the front were sizable vertical air intake slots; the rear had trapezoidal exhaust outlets. Rocker panel extensions and a rear spoiler extension were also part of the look. The whole package was accented by 20-inch aluminum alloy wheels.

The sedan was powered by a 2.0-liter four-cylinder engine, but don’t get it twisted. Buick engineers managed to squeeze almost 300 horsepower and 295 pound-feet of torque out of this turbocharged power plant.

Making 295 pound-feet of torque at a reasonably low 2,500 horsepower, this Buick Regal was quick, it accelerated with authority and its six speed automatic transmission was smooth. Of course it was quiet, real quiet. Silent running is now a hallmark of all contemporary Buicks. We were particularly impressed with the suspension after going over some sizable and abrupt indentations in the road.

Our GS AWD model had a four-wheel independent suspension with a unique high performance strut front suspension design. It reduced torque steer; improved vehicle sensitivity to tire irregularities and wheel balance; and there was more linear and communicative steering through improved camber control; and improved impact isolation on bumps and rough surfaces.

That’s Buick-speak. We thought the car was easy to drive, it cornered well, we felt no torque steer and not only did the suspension flatten out bumps in the road it did so quietly.

Our test car had all-wheel-drive that was front-wheel-drive orientated when the pavement was dry. The EPA numbers were 19 mpg in city driving, 27 mpg on the highway and 22 mpg combined. The car had an 18-gallon capacity fuel tank, thus, it had a range of more than 450 mils on the highway. That was not bad.

The interior was clean, almost egalitarian. The dash was curved with each front door as an anchor. The center stack held an eight-inch color touch screen. The instrument cluster was a 4.2-inch TFT screen with some strategically placed needle indicators that made it appear to be analogue.

It had chrome accents, two drive modes – touring and sport – in addition to normal and the TFT screen delivered customized information including navigation, the audio system, phone features and of course there was voice control.

Although we didn’t use it, our test car had adaptive cruise control and automatic collision preparation. That was the $1,195 option package called Driver Confidence Package #2. The car also had the Driver Confidence Package #1. It included sensor indicator, following distance, forward collision alert, and rear cross traffic alert, land departure warning, blind side alert with lane change alert and memory settings for the driver’s seat and sideview mirrors. We also had a moonroof.

About the only thing we could complain about was those sideview mirrors. They had a trapezoidal shape that matched the exhaust pipes. They looked good but they presented an oddly shaped reflection. However, we got used to it.

Our test vehicle was sporty, looked good, was an easy drive and garnered some street props. That wasn’t bad and for the quality and quiet that come with a Buick it bordered on outstanding. We didn’t think the $44,670 sticker was out of line for what you get.