Ravens acquire CB Will Davis from the Miami Dolphins 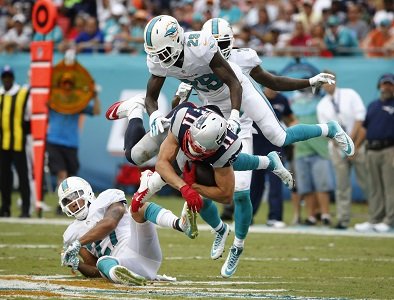 The Baltimore Ravens gave up 351 passing yards to Derek Carr and the Oakland Raiders in a losing effort. There were quite a few coverages blown and the results were clearly unacceptable. Ozzie Newsome and the Ravens brass wasted no time trying to find a possible solution. The Ravens were able to send a 2016 seventh round draft choice to the Miami Dolphins in exchange for cornerback Will Davis.

Davis was selected by the Dolphins in the third round of the 2013 NFL Draft. He suffered a season ending knee injury as a gunner on special teams against the Buffalo Bills in November of last season. The Dolphins were looking to trade Davis as they began to trim their roster down to the mandatory 53 man roster but found no takers.

The Dolphins ended up putting Davis on their 53 man roster after he had a big game in the preseason finale. Davis had two interceptions and according to Sports Talk Florida’s Brandon Howard, the young corner said that he was about 90 percent recovered from ACL surgery. He’s known as a ball hawk and has some nickel ability. This should help with the Ravens depth at the nickel spot and add a playmaker to the secondary. He was not on the active roster for the Dolphins first two games this season.