Can Crockett Gillmore emerge as another threat for the Ravens? 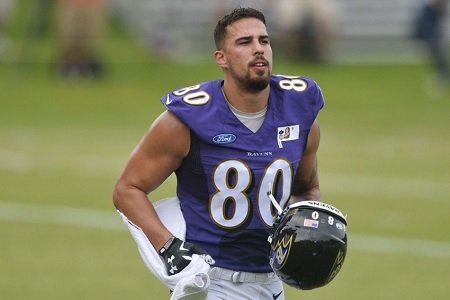 It is no secret that the Baltimore Ravens need to have someone other than wide receiver Steve Smith Sr. become a threat in the passing game. Crockett Gillmore showed that he has the ability to alter defensive game plans last week against the Oakland Raiders. The second year tight end is settling into his new role as a starter for the Ravens.

Gillmore broke multiple tackles as he rumbled 26 yards for his first NFL touchdown. He then carried two defenders into the end zone for his second touchdown, a nine yard catch and run. His performance has caused some to suddenly take notice. Joe Flacco talked about why Gillmore generates yards after the catch.

“He’s a tough guy to bring down, and he’s going to be good – a big guy for us moving the chains – because you get him the ball underneath,” Flacco said at a press conference on Wednesday. “Those guys are going to have a tough time tackling him with the first guy. You can see what happens when you get the ball in his hands.”

The attention that has been thrown his way recently isn’t something that Gillmore cares about. He just wants to go out and do what he needs to do to contribute to the Ravens getting their first win. “I don’t really like it,” Gillmore said. “I’m doing my job and going to work. It’s really [me] doing whatever I’m asked.”

Smith Sr. raved about Gillmore’s ability to get wide open despite not being the fastest player. Gillmore knows how to use his body to box out defenders on in breaking routes. He can also find holes against zone coverage on seam routes. That was how he scored his first touchdown.

The Raiders were forced to make a half time adjustment in order to contain Gillmore. They began to use a defender to get a hand on Gillmore to slow him down at the line of scrimmage.

Marc Trestman’s offense gives tight ends plenty of chances to make plays. Gillmore was known as a blocking tight end, but always had soft hands. The Ravens can take advantage of his reputation as a blocker by leaking him into a delayed crossing route after assigning him to get a punch on an outside pass rusher.

The first year starter made big improvement from the season opener to the second week. When his number was called, he came through with a big play. The Ravens believe that he can make opposing defensive coordinators take notice. Flacco stressed the importance of fueling the week to week improvement that is expected from Gillmore.

“We just got to keep him going, keep his head in it and keep him growing from week to week. We can’t ever let him just get complacent where he is. [We have to] just keep him growing, and I think he’s that type of player.”