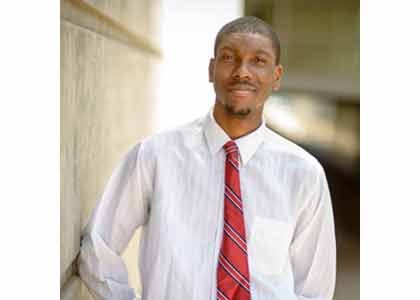 ANNAPOLIS, Md. — Jeremy Blackstone, 23, knows what it means to embrace unforeseen challenges with courage and determination. The Annapolis native recently became the first of 12 incoming Ph.D. scholars selected to receive a fellowship from the Alfred P. Sloan Foundation Minority Ph.D. Program at the University of California, San Diego (UCSD), to pursue a doctorate in Computer Science and Engineering. The program is a multi-million dollar initiative to support underrepresented minority graduate students in STEM fields. Jeremy will receive $40,000 over a four-year period, along with additional funding.

“My mom [Beverly] would have homework mode when my brother [David] and I were in elementary and middle school. Basically, it was a time [after] we got home, until everyone was done their homework— no one could turn on the TV, ” Jeremy said.

“Being at Howard not only gave me the technical skills to go forward, but it also gave me mentoring from my professors, colleagues and others mentors of various positions at the university. It’s basically a family environment, not just professional,” Jeremy said.

Jeremy grew up attending Holy Temple Cathedral in Annapolis. After surviving a nearly fatal heart attack in 2010, the medical emergency led him to develop an even closer spiritual walk with God.

“It was during my senior year in high school, I was just playing a pick-up game of basketball at the park, and all of the sudden I went into full cardiac arrest, and I was medically declared dead for 20 minutes,” Jeremy said. “One of the guys that I was playing basketball against at the park that day happened to be an Emergency Medical Technician (EMT) in training, and there were three nurses at the park…so they were doing CPR for 20 minutes, until an ambulance showed up with the defibrillator to shock my heart back to life.”

Jeremy was placed in a three-day, medically induced coma. Testing revealed that he needed open-heart surgery to correct a rare, unknown heart condition. Despite recovery time, the Annapolis High School graduate was able to walk during his graduation ceremony then later begin his freshman year at HU on time.

“People say all of the time that tomorrow isn’t promised, but for me that became a reality, and so after that incident, I tried to live everyday as if it would truly be my last day. So I got a lot more involved in my church and Bible studies when I got to Howard,” Jeremy said. “I put God first, and I put my studies second, and there was pretty much not much room for anything else.”

Through volunteering to tutor and mentoring other students, Jeremy discovered his passion for teaching. The Ph.D. student wants younger minority students to know that with hard work and support, they too can thrive in Computer Science. Jeremy’s brother, David is currently studying it at HU. Jeremy serves as an example to many how to pursue a successful path and persevere.

“I definitely want to become a college professor,” Jeremy said. “I want to be an encouragement to students who were like me, when I first started Computer Science, so they can see another successful minority professor who is able to relate to them.”

Jeremy Blackstone is a cousin of writer Andrea Blackstone