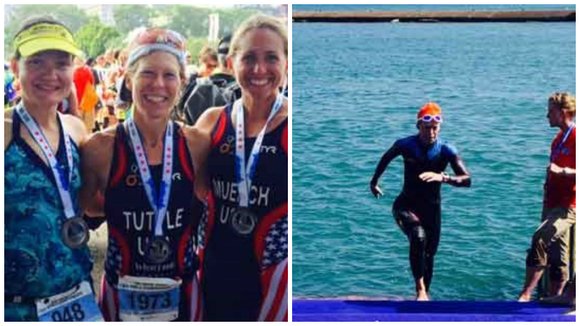 USA triathlete and registered dietitian, Michelle Tuttle, placed sixth in the Sprint World Championship (50-54 age group), third for the U.S. team, at the 2015 International Triathlon Union (ITU) triathlon in Chicago recently. With a time of 01:15:36, Tuttle, who hails from Columbia, Maryland, beat her former record set during the 2013 London ITU triathlon. Tuttle also placed eighth in the Olympic Distance World Championship with an official time of 02:07:45.

“What a race today! Winds were a factor both on the swim and bike. So amazing to be out there competing with all these incredible athletes,” said Tuttle.

“We could not be prouder of Michele,” declared Tim O’Connor, WFC president. “Her discipline and determination over the past year has been phenomenal. As a registered dietitian, she also knows the importance of making smart dietary choices, including wheat foods, to be at her best whether competing in triathlons or managing the daily stresses of a working mom. We look forward to having her as an ongoing member of the WFC team to educate consumers about the role of wheat foods as an essential component of a nutritious diet.”

“Not only does wheat factor into my pre- and post-race nutrition in terms of the nutrients it provides, but more importantly, I really love eating wheat-based foods like bread, pasta, cereal, bagels, and cookies. I eat a huge variety of foods, and even I have to watch my portions, but the truth is that life would not be much fun for me without wheat,” Tuttle said.

Tuttle competed at USA Triathlon (USAT) 2012 Nationals (Olympic and Sprint distances) and qualified for the 2013 World ITU Triathlon Championships in London. There, she won the bronze medal for the sprint distance (50-54 age-group) and placed 8th in the Olympic distance. She has been a USAT All-American triathlete since 2012 and is currently certified as a USAT Level I Triathlon Coach and US Masters Swimming Coach (Level 2).