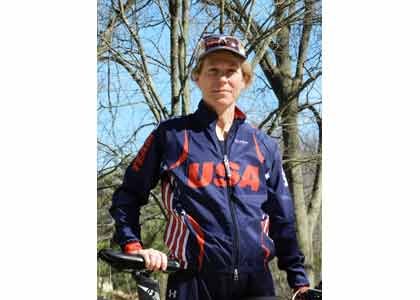 Fewer than 10 percent of individuals eat more than the recommended three servings of whole grains per day and most, including African-Americans, need to eat more than the one serving per day they are averaging, according to Michele Tuttle, a dietitian and a Team USA triathlete.

Tuttle, a Columbia, Maryland native who placed sixth in the Sprint World Championships at the 2015 International Triathlon Union triathlon in Chicago earlier this month says the best way to get the recommended daily allowance of whole grains is to try whole wheat breads, pizza crusts, tortillas and pastas.

She says it’s important to look for the words “whole grain” on the ingredient list of breakfast cereals and crackers and to try and eat brown rice, whole kernel corn, quinoa and oatmeal.

“Eating foods prepared at home can also make it easier to include more whole grains because we have more control over what we eat when we buy and prepare it ourselves,” she said.

Like all grains, whole grains provide an array of nutrients that are beneficial to the body including fiber, vitamins B1 and B3, iron, magnesium, selenium, manganese and zinc, Tuttle said.

Eating three servings of whole grains daily along with other gains, fruits and vegetables, lean proteins and dairy foods has been linked with lower rates of many diseases like stroke, heart disease, diabetes, cancer and asthma.

Any food made from wheat, rice, oats, corn, or another cereal is a grain product, according to the American Heart Association. Bread, pasta, oatmeal and grits are all grain products and there are two main types of grain products: whole grains and refined grains.

Also, there are no bad grains, Tuttle said.

One misnomer individuals tend to make is to dismiss refined grains as being unhealthy or harmful, Tuttle said, noting that refined grains are foods made from enriched white flour and they can include breads, cereals, tortillas and pasta.

“Pasta made from white flour can also be a major source of something called resistant starch, which forms when pasta has been cooked and then cooled, so eating leftover pasta is really healthy,” she said. “Resistant starch encourages gut bacteria to produce short chain fatty acids and this is very good for the health of colon cells.”

Nearly two-thirds of Americans say they heed the Dietary Guidelines advice to “make at least half your grains whole,” with the majority of Americans eating more whole grains than they did five years ago.

Reportedly, the push toward whole grains comes as studies show that eating whole grains lowers the risk of many chronic diseases, healthier blood-pressure levels and better weight control. As to whether some whole grains are healthier than others, Tuttle says, it’s difficult to decipher.

“We rarely eat grains by themselves. Breads are usually eaten as part of sandwiches or in addition to other foods at a meal,” she said. “Oats, barley and other grains are often mixed with other foods. So, eating any whole grain is going to mean that you are eating other foods too.”