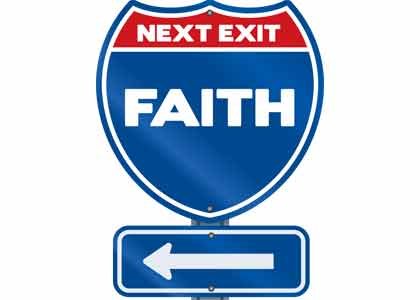 Exit polls are conclusive— 100 percent of us will die. The way we die will vary somewhat, but die we will. Many people in the world will never vote, own a new house, drive a new car or eat in a nice restaurant but all will experience death.

My father-in-law passed suddenly last week. On a routine Thursday morning, he was taking my mother-in-law for a typical medical appointment and apparently had a heart attack while behind the wheel. He managed to pull off to the side of the road before he gasped and left the world with his wife in the passenger seat.

The trauma of receiving a call from a stranger stating he was not responsive nor could a heartbeat be found was very unexpected. He essentially did most of the same stuff we all did and we estimated he had another twenty years. Again, it was proven there are never any guarantees when it comes to additional time on this planet.

I don't know how anyone can totally prepare for death but being at peace with God and man should be at the forefront. This is surely a day-by-day activity because we all have days where we certainly are not pleasing our creator 100 percent. We go through life fretting, miffed at people, thinking bad thoughts and sometimes even doing the wrong things. We fall out with people or people fall out with us and often these relationships only go further south and they are never repaired before death.

As hard as it may be to believe, nobody ever had a bad thing to say about my father-in-law. He never had anything bad to say about anybody. I asked one of the clerks at a small store in town if he could think of anything bad about him and we both agreed it would be impossible. I realize no one is perfect but it's nice when everyone speaks so highly of you. They didn't even do that about Jesus.

You also need to either pay for your funeral costs before you die, have insurance or have some cash set aside for your family. A moderate funeral including grave, marker, casket, etc could easily cost you $15,000. I said moderate but I suspect you could easily bump this up to $18,000 and of course you can always go higher or more extravagant.

I am also including the cost of placing an obituary in our regional paper. Can you believe it cost our family over $600 for an obituary? This was just one newspaper! No, newspapers do not run obituaries for free!

There are all kinds of little hidden expenses when it comes to funerals. Be forewarned my friend and be prepared.

Last weekend, a young couple we know lost two parents due to a motorcycle crash. I can only imagine the costs. I must hasten to say that the same funeral home that took care of my father-in-law also had two children from a family lost in a fire in our county. We were told the funeral home was taking care of all the costs.

I realize there are lots of things to write about today. I could write about the big Republican debate and the candidates who are politically dying before our eyes. Most of them are trying to suck in a few more breaths of oxygen before they finally expire into political has-beens.

However, after grieving with family and loved ones at the funeral home and graveside for the entire weekend, I just couldn't really think of anything that seemed more important. Please give some thought about being prepared for exiting this life.

Glenn Mollette is an American Syndicated Columnist and Author. He is the author of eleven books and his column appears in all fifty states. To contact him, visit: https://www.facebook.com/GlennMollette