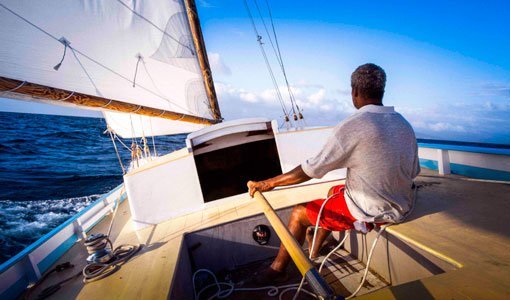 The award-winning documentary “Vanishing Sail” will be screened on Sunday, April 3, 2016, at Maryland Hall as part of the Annapolis Film Festival. The story follows Alwyn Enoe (pictured) on his quest to build one last wooden sloop and a culminating race. (Photo: Alexis Andrews)

On the tiny island of Carriacou in the Eastern Caribbean, Alwyn Enoe is one of the last wooden boat builders practicing a trade that has been passed down the generations from the original Scottish settlers who arrived more than two centuries ago.

Approaching age 70 and with no more orders coming in, Enoe decides to build one last sailing sloop with the hope that his sons will continue the trade.

Enoe’s story unfolds in the film “Vanishing Sail,” which will be screened at 10 a.m. on Sunday, April 3, 2016, at the Maryland Hall for the Creative Arts Auditorium on Chase Street as part of the fourth Annapolis Film Festival.

“Vanishing Sail” is one of 70 films that organizers plan to screen over four days— from Thursday, March 31 to Sunday, April 3— at the festival, which will also include workshops, post-film discussions and other activities.

“It’s a whole experience and the memories don’t go away,” said festival co-founder Patti White, who noted that the festival’s vision is to establish Maryland’s capital as a center for filmmakers to showcase different global perspectives and independent thought to a variety of audiences through their work.

Some of the selected films include performances from Hollywood A-listers and legends.

“The Waiting,” which will be featured on Saturday, April 2, stars legendary “Godfather” actor James Caan as the elderly victim of a supernatural plot by two teenage neighbors to convince him he is being haunted.

Directed by Robert Edwards, “One More Time,” finds Walken portraying a faded crooner stewing in his Hamptons mansion over the professional acclaim that eluded him and the trail of romantic wreckage in his wake. The stew is stirred when daughter Jude (Heard) arrives with her own problems, including a rivalry with her overachieving sister, a ruinous love life, and a fraught relationship with her famous father.

Festival organizers and others, though, are high on “Vanishing Sail,” which follows Enoe’s progress and despair over three years from hauling his trees out of the forest to a final traditional launching ceremony on the bayside.

“I met Alwyn Enoe a few years ago on Carriacou Island in the Caribbean. Approaching 70, he is one of the last wooden boat builders,” said Alexis Andrews, the film’s director.

“He and his sons spent 30 months building one last racing sloop and I was lucky enough to be able to document it on film. In the old days these wooden ships were an important part of the Caribbean culture known as sail-trading or more accurately as the smuggling of contraband,” Andrews said.

Juliet Burch, the Annapolis Sailing Festival Director of Programming, said filmmakers and renowned sailing aficionados Andrews and Gary Jobson have come together to capture the attention of the local sailing community with their respective films, “Vanishing Sail” and “The Magic & Mystery of Sable Island.”

“Our tradition of sailing films on Sunday at the Annapolis Film Festival has always been a hit, but this year is especially strong and we expect a great turnout,” Burch said. “We just learned that His Excellency, Dr. Angus Friday, Ambassador for Grenada to the USA will be with us for ‘Vanishing Sail.’ We could not be more thrilled.”

“Vanishing Sail” is part of a transmedia project representing 15 years of research that includes a two-volume photography book, an archive of interviews with some of the top names in West Indies sailing, the building of five, 42-foot, transitional sailing vessels in Carriacou and an annual regatta on the island of St. Barthelemy that’s sponsored by UNESCO.

“This is the Maryland premiere,” Andrews said. “This story culminates in an exciting wooden sailboat race with Enoe’s boat winning a major prize.”

To view the trailer for “Vanishing Sail” visit: www.VanishingSail.com. For tickets or more information about the festival, visit: www.annapolisfilmfestival.com.