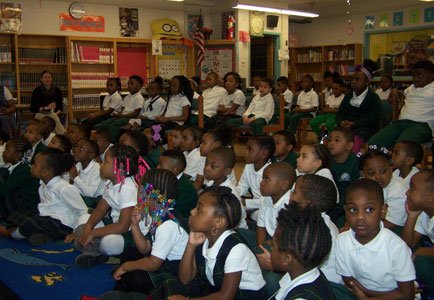 This year, members of the Baltimore Chapter of Continental Societies, Inc. celebrated Black History Month by participating in over thirty African American Read-Ins in area Baltimore city and county schools, universities, churches, homes and as part of one of the organization’s national initiative.

Continentals partnered with Sistas Thrilled About Reading Book Club of Baltimore to provide gifts for students who participated in African American Read-ins during Black History Month.

From family rooms to libraries, to classrooms, to a school bus and a university campus, the celebrations came in all shapes and sizes this year. As the chapter celebrates 60 plus years serving children and youth in the Baltimore metropolitan community, Charter Member Margaret Turner continues to express her excitement because the chapter was able to reach over 10,800 children, youth and other participants during the month of February 2016.

One of the most exciting Read-Ins was held on February 23, 2016 at The Empowerment Academy as Continental Book Buddies from the Education Committee celebrated Black History Month with guest Griot Stanley “Bunjo” Butler, director at the Walbrook Enoch Pratt Library and a member of the Griot Circle of Maryland and the National Black Storytellers.

Butler was very engaging and involved with interactive stories for the 120 students in grades pre-k through second that required listening. There was excitement and cheers as the students responded to Bunjo’s stories and antics as he acted out the stories.

The Continentals partnered with Sistas Thrilled About Reading Book Club of Baltimore to provide gifts for the students. They presented each class with a book entitled “No Mirrors in My Nana’s House” written by an African American author, along with African American Read-In drawstring backpacks and bookmarks.